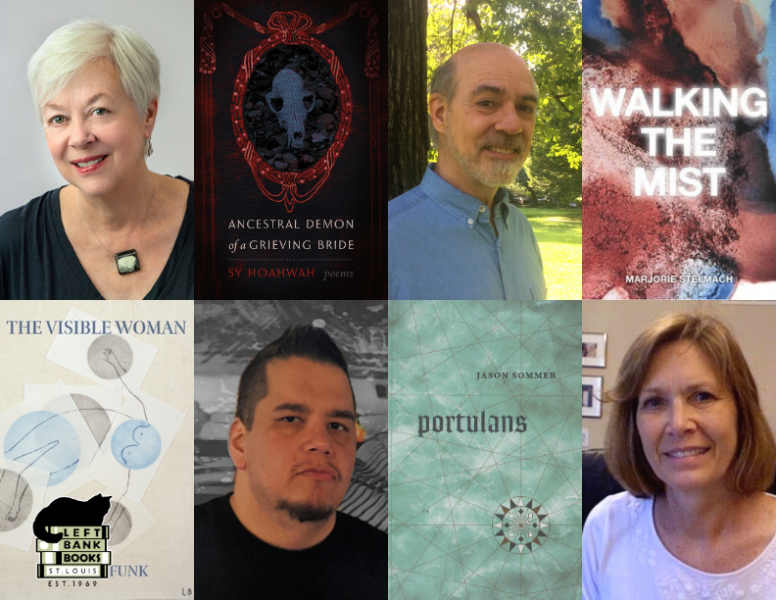 About The Visible Woman

In The Visible Woman, Allison Funk writes of how women often disappear into the roles expected of them, becoming invisible to themselves. To fill in "the thin / chalk outline" of herself that she's "drawn and erased" for as long as she can remember, Funk returns to the anatomical model of "The Visible Woman" she left unassembled as a child. With poems rather than the kit's plastic organs and bones, she strives to "create a likeness / to embody herself." In her efforts at self-representation, the poet is guided by the visual artist Louise Bourgeois- her real-life model of a woman who proved that art gives us a way of recognizing ourselves... Read More

About Ancestral Demon of a Grieving Bride

Fractured storytelling for a fractured world, Ancestral Demon of a Grieving Bride draws readers into a world that appears eerily familiar but unsettling as well. Fierce, visceral, sometimes funny, and wholly original, Hoahwah's poems will linger in a reader's dreams long after she's closed the book.

Taking inspiration from medieval sea charts—portulans—the poems in Jason Sommer’s collection bring a fresh variation to the ancient metaphor of life as a journey. Creating a coordinate system charting paths between ports and the dangers that surrounded them, portulans offered webs of routes and images through which sailors could navigate. These maps—both accurate and beautifully illustrated—guided mariners from port to port weaving paths at the threshold of the open sea. Similarly, the course of these poems navigates familiar mysteries and perennial questions through times of unbelief, asking whether consciousness is anchored in the transcendent, if inward travel can descend past the self, and if the universe can be accounted for by physics alone... Read more

About Walking the Mist

'An artist worthy of her art would find a way / to capture this absence.' Thus, Marjorie Stelmach chides herself for failing to quite discover a language equal to the deepest mysteries, death and loss. This piercing collection of poems, this anatomy of grief, plays out on the desolate shores of Ireland, a care center for the elderly, and in the poet's memory and imagination. It is the simplest and oldest of stories: a daughter mourns her mother's death. But in facing her anguish so directly, in struggling so courageously to give words and meaning to the unknowable, Stelmach has forged a terrible beauty. I can hardly imagine an artist worthier of her art.--George Bilgere

Allison Funk is the author of five previous books of poems, including Wonder Rooms, from Free Verse Editions of Parlor Press. The recipient of a fellowship from the National Endowment for the Arts, the Samuel French Morse Poetry Prize, and the Society of Midland Authors Poetry Prize, she is a Professor Emerita at Southern Illinois University Edwardsville.

Sy Hoahwah is Yappituka Comanche and Southern Arapaho. His poetry has appeared in publication such as Shenandoah, Indiana Review, Mêlée and The Florida Review. He is also the author of Velroy and the Madischie Mafia (West End Press, 2009). He resides near St. Louis, MO.

Jason Sommer is the author of five books of poetry, including The Laughter of Adam and Eve and three in the Phoenix series: Portulans, Other People’s Troubles and The Man Who Sleeps in My Office. He has also published English versions of Irish language poems and two collaborative book-length translations of contemporary Chinese fiction. His poems have appeared in publications such as the New Republic, Ploughshares, Chicago Review, Agni, River Styx, and TriQuarterly, among others.

Marjorie Stelmach is the author of five previous volumes of poems, Falter, Night Drawings (awarded the Marianne Moore Prize), A History of Disappearance, Bent upon Light, and Without Angels. A selection of her poems received the first Missouri Biennial Award. Her work has recently appeared in Boulevard, Cincinnati Review, Florida Review, Gettysburg Review, Image, New Letters, Poet Lore, ONE, Relief, and Tampa Review.