Dr. Ibram X. Kendi - How to Raise an Antiracist

Tuesday, June 21, 2022 - 7:00pm
Tuesday, June 21, 7pm CT
In person at The Grandel Theatre
3610 Grandel Square, St. Louis, MO 63103
Tickets available through MetroTix for in person attendance with each ticket to include one book.
**Vaccination and masks required for in-person attendance**
To attend virtually, please purchase a virtual ticket to include one book. 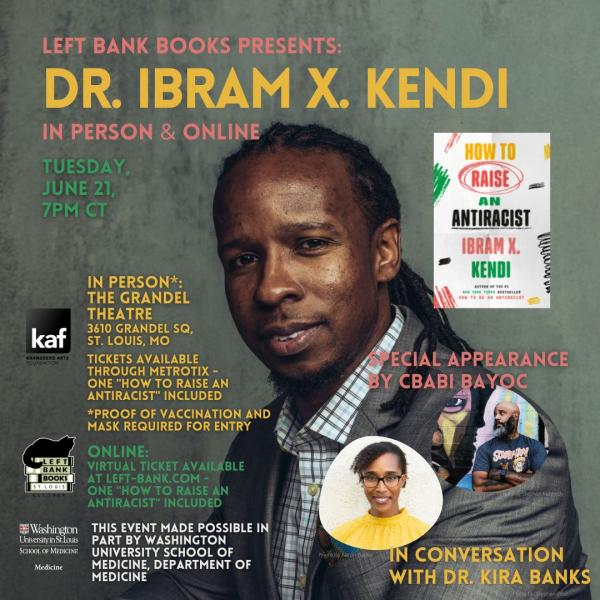 Left Bank Books welcomes one of Time Magazine's 100 most influential people in the world
Dr. Ibram X. Kendi,
who will discuss the book that every parent, caregiver, and teacher needs to raise the next generation of antiracist thinkers,
How to Raise an Antiracist,
in person at The Grandel
and virtually at 7pm CT on June 21st.
Tickets are available through MetroTix for the in person event or Left-Bank.com for the virtual event.
Join us in person or virtually. Each ticket will include one copy of
How to Raise an Antiracist
from Left Bank Books to support authors and independent bookstores!
Dr. Kendi will be in conversation with Co-founder of the Institute for Healing Justice and Equity and Saint Louis University Professor
Dr. Kira Banks.
Dr. Kendi will be joined by special guest
Cbabi Bayoc
to celebrate the release of Goodnight Racism by Dr. Ibram X. Kendi and illustrated by St. Louis artist Cbabi Bayoc.
This event is made possible in part by Washington University School of Medicine, Department of Medicine.
Dr. Ibram X. Kendi is the Andrew W. Mellon Professor in the Humanities at Boston University and the founding director of the BU Center for Antiracist Research. He is a contributing writer at The Atlantic and a CBS News racial justice contributor. He is the host of the new action podcast Be Antiracist. Dr. Kendi is the author of many highly acclaimed books including Stamped from the Beginning: The Definitive History of Racist Ideas in America, which won the National Book Award for Nonfiction, making him the youngest-ever winner of that award. He has also produced five straight #1 New York Times bestsellers, including How to Be an Antiracist, Antiracist Baby, and Stamped: Racism, Antiracism, and You, co-authored by Jason Reynolds. In 2020, Time magazine named Dr. Kendi one of the 100 most influential people in the world. He was awarded a 2021 MacArthur Fellowship, popularly known as the Genius Grant.
Cbabi (pronounced Kuh-bob-bi) Bayoc is an internationally-known visual artist and illustrator residing in St. Louis, Missouri. His subjects include family, children, music and a bunch of other cool stuff designed with line, bold color and phunk! Cbabi spends his time working on a variety of projects, including portraits, community murals, school murals, and children's book illustrations. Learn more at his website cbabibayoc.com or follow him on Instagram @cbabi.
Dr. Kira Banks co-founded the Institute for Healing Justice and Equity at Saint Louis University, where she is a Professor in the Department of Psychology. She also served as a racial equity consultant for the Ferguson Commission and continued as the Racial Equity Catalyst for Forward Through Ferguson. In addition, Dr. Banks has published over 20 articles in peer-reviewed outlets, including American Psychological Association journals such as American Psychologist, Cultural Diversity & Ethnic Minority Psychology, and Journal of Diversity in Higher Education. She has also contributed to The Harvard Business Review and popular media outlets like The Atlantic and The Guardian. Today, Dr. Banks has a podcast—Raising Equity—to support adults in talking to kids about systems of oppression. She is also co-principal of The Mouse and the Elephant, which develops customized curriculum to meet organizations’ long-term needs.
The book that every parent, caregiver, and teacher needs to raise the next generation of antiracist thinkers, from the #1 New York Times bestselling author of How to Be an Antiracist and recipient of the MacArthur "Genius" Grant.

The tragedies and reckonings around racism that are rocking the country have created a specific crisis for parents, educators, and other caregivers: How do we talk to our children about racism? How do we teach children to be antiracist? How are kids at different ages experiencing race? How are racist structures impacting children? How can we inspire our children to avoid our mistakes, to be better, to make the world better?

These are the questions Ibram X. Kendi found himself avoiding as he anticipated the birth of his first child. Like most parents or parents-to-be, he felt the reflex to not talk to his child about racism, which he feared would stain her innocence and steal away her joy. But research and experience changed his mind, and he realized that raising his child to be antiracist would actually protect his child, and preserve her innocence and joy. He realized that teaching students about the reality of racism and the myth of race provides a protective education in our diverse and unequal world. He realized that building antiracist societies safeguards all children from the harms of racism.

Following the accessible genre of his internationally bestselling How to Be an Antiracist, Kendi combines a century of scientific research with a vulnerable and compelling personal narrative of his own journey as a parent and as a child in school. The chapters follow the stages of child development from pregnancy to toddler to schoolkid to teenager. It is never too early or late to start raising young people to be antiracist.

"Both memoir and call to action, Ibram X. Kendi's insightful book rightly encourages the critical thinking that all adults need to engage the children they love in the most essential conversations about racism. Don't fool yourself--silence is not a helpful strategy! If you want to raise empowered, antiracist children, read this book, take a deep breath, and start talking." --Beverly Daniel Tatum, Ph.D., author of Why Are All the Black Kids Sitting Together in the Cafeteria? and Other Conversations About Race

"With the fierce devotion of a parent who demands a safer world for his child, our most trusted voice on antiracism reveals the critical role of parents, caregivers, and teachers in fostering either racist or antiracist attitudes in all children. Rendered intimate with stories from his own childhood and his parenting journey, this book is as compassionate as it is cogent and timely. Ibram X. Kendi once again lights the way." --Julie Lythcott-Haims, New York Times bestselling author of How to Raise an Adult: Break Free of the Overparenting Trap and Prepare Your Kids for Success

"The littlest human being can learn to be an antiracist. Antiracist parenting is imperative as white supremacists recruit on the internet daily; parents need to be proactive by developing the skills and language to understand the parenting journey of antiracism. With love, vulnerability, and the remarkable brilliance we have now come to expect in his books, Kendi walks us through this journey. No matter where you are as an antiracist parent or the age of your child, this book is for you." --Bettina Love, author of We Want to Do More Than Survive: Abolitionist Teaching and the Pursuit of Educational Freedom

How to Raise an Antiracist (Hardcover)

How to Be an Antiracist (Hardcover)

Be Antiracist: A Journal for Awareness, Reflection, and Action (Paperback)

Antiracist Baby Board Book (Board book)

Stamped (For Kids): Racism, Antiracism, and You (Hardcover)

Stamped: Racism, Antiracism, and You: A Remix of the National Book Award-winning Stamped from the Beginning (Hardcover)

Stamped from the Beginning: The Definitive History of Racist Ideas in America (Paperback)

How to Raise an Antiracist (Large Print / Paperback)

Cómo ser antirracista / How to Be an Antiracist (Paperback)