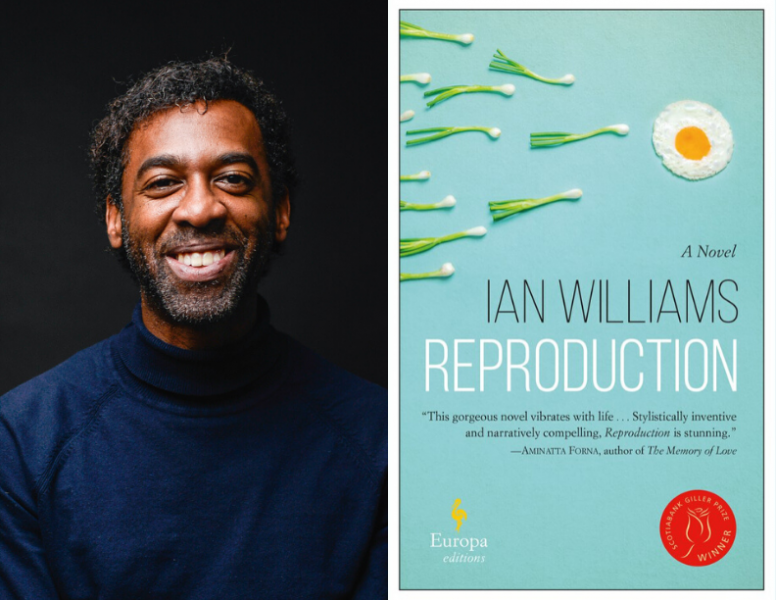 Left Bank Books welcomes poet, short story writer, and novelist Ian Williams, who will discuss his debut novel, Reproduction, on Facebook Live at 7pm on May 11. WiIliams will be in conversation with Michael Reynolds, editor in chief of Europa Editions. Join us on our Facebook Page and order a copy of Reproduction from Left Bank Books to support authors and independent bookstores!

WINNER OF THE 2019 SCOTIABANK GILLER PRIZE AND CBC'S BEST NOVEL OF THE YEAR, this best-selling debut novel is an energetically told, funny, and moving book about how strangers become family.

Reproduction tells a crooked love story in which love takes strange, winding paths and grows in a context shaped by community, family, longstanding friendships, and fleeting interactions that leave their mark on us forever.

Felicia, a nineteen-year-old student from a West Indian family, and Edgar, the lazy-minded and impetuous heir of a wealthy German family, meet by chance when their ailing mothers are assigned the same hospital room. After the death of Felicia's mother and the recovery of Edgar's, Felicia drops out of high-school and takes a job as caregiver to Edgar's mother. The odd-couple relationship between Edgar and Felicia, ripe with miscommunications, misunderstandings, and reprisals for perceived and real offenses, has some unexpected results.

Years later, Felicia's son Armistice--"Army" for short--is a teenager fixated on a variety of get-rich-quick schemes that are as comic as they are indicative of the immigrant son's fear of falling through the cracks. When Edgar re-enters Felicia's life at a typically (for him) inopportune moment, the book's exhilarating final act is set in the motion and the full import of its title is revealed.

"The startling brilliance of Ian Williams stems from his restlessness with form. His ceaseless creativity in sussing out the right patterning of story, the right vernacular nuance, the right diagram and deftly dropped reference--all in service of vividly illuminating the intermingled comedy and trauma of family."-- David Chariandy, author of Brother

Poet, short story writer, and novelist Ian Williams was named one of "ten Canadian writers to watch out for" by CBC in 2018. His poetry has been shortlisted for the Griffin Poetry Prize and the Robert Kroetsch Poetry Book Award. He won the Danuta Gleed Literary Award for his short stories. Williams holds a Ph.D. in English from the University of Toronto and is currently an assistant professor of poetry in the Creative Writing program at the University of British Columbia in Vancouver. Reproduction, his debut novel, was a finalist for the Amazon first novel prize, was a CBC Spring & Black History Month pick, and dubbed one of the "Buzziest Books of 2019" by Chatelaine Magazine.