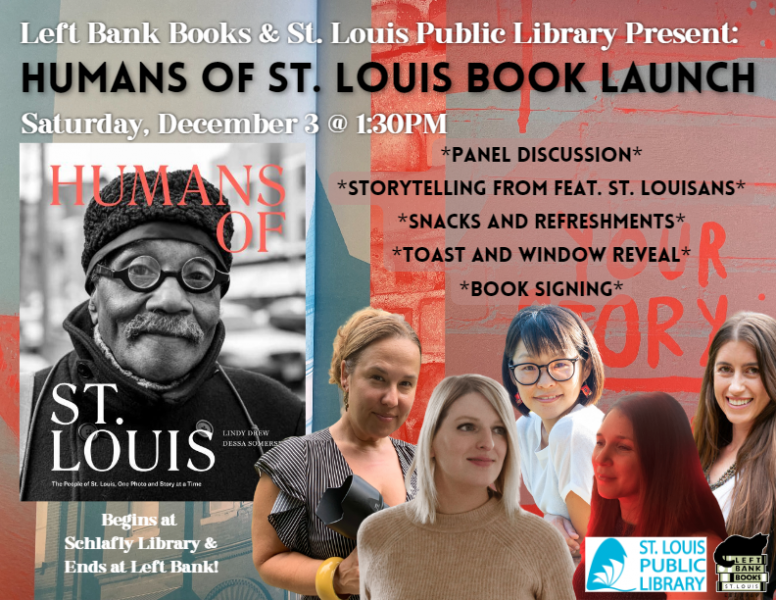 Left Bank Books, Schlafly Public Library, and Humans of St. Louis presents the collaborators behind the stunning photography collection
Humans of St. Louis
for a panel discussion featuring
Lindy Drew, Dessa Somerside, Elaine Cha, Audra Hubbell, & Rebecca Leffell Koren
at Schlafly Public Library on December 3rd at 1:30pm!
The panel discussion will be followed with storytelling from some of the featured St. Louisans of the book.
Then you can follow us down the street for a window reveal at Left Bank Books
with a celebratory toast to welcome the book into the world.
The toast and window reveal will happen at 4:00pm at Left Bank Books.
Order copies of
Humans of St. Louis
from Left Bank Books to support authors and independent bookstores!
Signings will be happening at both locations following the panel and the toast.
If you are unable to make it in person, request a signed copy in your order.

As St. Louis’s story continues to be written, we took a snapshot of the past handful of years the way we always have — one photo and story at a time. Typically, our Humans of St. Louis posts only get a day of playtime on social media. Yet, the stories are still relevant, timely, and enjoyed by many. So we made a book!

We decided to self-publish. We kept it local from the stories to the creative team. And we built something truly beautiful and unique of, by, and for St. Louis.

This curated hardcover 500+ page book of portraits and stories features individuals from different backgrounds, interlaces history specific to STL, and reveals contemporary social issues about life and life in this city.

After receiving her bachelor’s of science degree in biology at the University of Arizona and studying at the International Center of Photography, Lindy traveled and worked through Latin America as a photojournalist. In Chile, she co-founded OJOS nuevos to teach young girls documentary photography with digital cameras. In Costa Rica, she was a staff photographer for The Tico Times. She then worked at Casa de Sueños in Phoenix, Arizona, reunifying unaccompanied undocumented minors with their families in the States. Lindy graduated in 2016 with master’s degrees in social work and public health from the Brown School at Washington University in St. Louis, where she co-founded Humans of St. Louis with Caroline Fish. She has since led the team to produce visual stories that represent larger community conversations and development in the St. Louis region. Lindy’s photography has been published by the St. Louis Post-Dispatch, Riverfront Times, STL Magazine, The New Yorker, International Rescue Committee, Fodor’s Travel, Phoenix New Times, Travel Photographers Network, Transitions Abroad Magazine, and The Village Voice.

Dessa applies her background in systems dynamics to critically evaluate and develop solutions to social issues. She has worked in child welfare, maternal and child health and nutrition, and economic and social development in over 10 countries. Dessa moved back to St. Louis after working for the UN World Food Programme as a Leland International Hunger Fellow in Cambodia. She worked as director of quality systems for Project Peanut Butter and is now the chief operating officer for Ariel Foods FZE, which produces a life-saving therapeutic food product for malnourished children in West Africa. In March 2020, Dessa co-founded MapleGOOD, a mutual aid network in St. Louis County to bring neighbors together during the COVID-19 pandemic. She has been on the Humans of St. Louis Board of Directors since its inception in 2016. Dessa received her bachelor’s degree in cultural anthropology from Boston University. And she received her master’s degrees in public health and social work from Washington University in St. Louis in 2013.

Audra Hubbell is a graphic designer whose client work has included everything from global brand communications to public projects such as Chicago's Navy Pier revitalization plan and the University of Illinois at Chicago's proposal for the National Obama Presidential Library. Hubbell's work has been featured by Paste magazine, The Huffington Post, Design Taxi and The Society of Typographic Art’s Chicago Design Archive. She holds a Master of Fine Arts degree with an emphasis in Graphic Design from The University of Illinois at Chicago and is currently a Senior Lecturer in Design at the Sam Fox School of Design and Visual Arts. cargocollective.com/audrahubbell

Becca Leffell Koren is a multidisciplinary designer specializing in publication and systems design. She collaborates with clients on projects in the fields of art, culture, architecture, and education. Previously she has worked for the Israel Museum, Jerusalem, the RISD Museum in Providence, RI, and This Is Our Work in New York. She holds an MFA in graphic design from the Rhode Island School of Design and a BFA in Communication Design from the Sam Fox School of Design & Visual Arts at Washington University in St. Louis where she is currently a Senior Lecturer. rebeccaleffellkoren.com

Elaine is now the new Host/Producer of “St. Louis on the Air” at St. Louis Public Radio. She continues learning more about the St. Louis region (her most permanent home to date) in both her professional and personal life. Working with HOSTL, and on the HOSTL book, represents the very best of what Elaine loves… and what drives her to do better.

Yetunde Janski-Ogunfidodo (Tunde) is a visual/performing artist and event producer, anti-oppression facilitator/trainer/consultant, and transformational coach with a focus on dismantling systemic oppression, especially in the worlds of philanthropy and the arts. Driven by a love of meaningful experiences and a passion for equity, education, and community-building, she has built a career initiating and supporting projects that make space for human connection, often involving elements of curation, convening, and collective visioning.

She can also be regularly found advising and working alongside organizations and institutions to align their work with envisioning and creating more equitable and restorative projects, initiatives, spaces, and communities. In addition to this work, she has served on the national Emerging Leaders Council for Americans for the Arts, the steering committee of the Emerging Leaders in Philanthropy (EPIP) St. Louis chapter, and on various future-crafting committees in the St. Louis region.

Our Schlafly Branch does not have free parking. Patrons may park on the street at meter parking or in the attached parking garage.