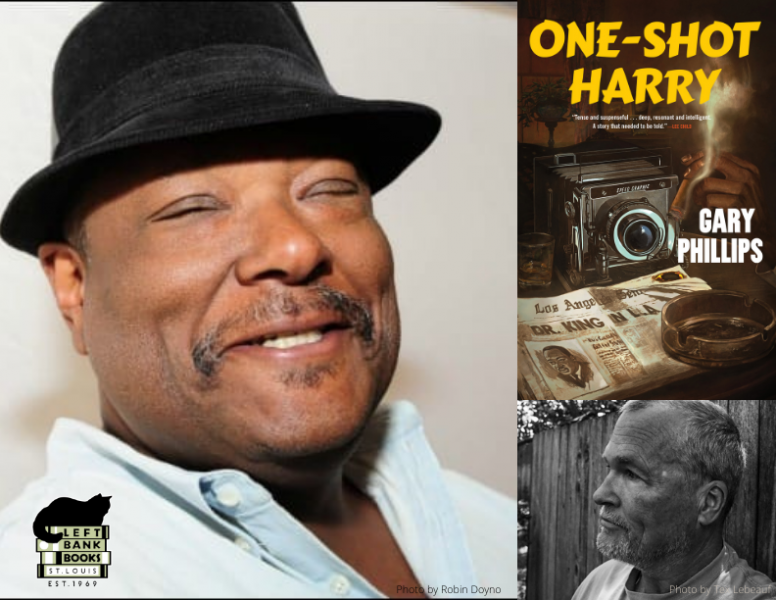 Left Bank Books welcomes Master storyteller and crime fiction legend
Gary Phillips,
who will discuss one of CrimeReads Most Anticipated Books of 2022,
One-Shot Harry,
on our Facebook Live Page at 7pm CT on April 12th.
Phillips will be in conversation with St. Louis' noir master
Scott Phillips.
Join us on our YouTube & Facebook Live Page and order a copy of
One-Shot Harry
from Left Bank Books to support authors and independent bookstores!

Gary Phillips has published novels, comics, novellas, short stories and edited or co-edited several anthologies, including the Anthony-winning The Obama Inheritance: Fifteen Stories of Conspiracy Noir. Almost 30 years after its publication, his debut, Violent Spring, was named one of the essential crime novels of Los Angeles. He also was a story editor on Snowfall, an FX show about crack and the CIA in 1980s South Central, where he grew up.

Scott Phillips is a screenwriter, photographer and the author of eight novels and a short story collection. His bestselling debut novel, The Ice Harvest, was a New York Times Notable Book and was adapted as a major motion picture starring John Cusack and Billy Bob Thornton. He is the winner of the California Book Award, as well as being a finalist for the Edgar Award, the Hammett Prize and the CWA Gold Dagger Award. Scott was born and raised in Wichita, Kansas and lived for many years in France. He now lives with his wife and daughter in St. Louis, Missouri.

When Ingram hears about a deadly automobile accident on his police scanner, he recognizes the vehicle described as belonging to his good friend and old army buddy, a white jazz trumpeter. The LAPD declares the car crash an accident, but when Ingram develops his photos, he sees signs of foul play. Ingram feels compelled to play detective, even if it means putting his own life on the line. Armed with his wits, his camera, and occasionally his Colt .45, "One-Shot" Harry plunges headfirst into the seamy underbelly of LA society, tangling with racists, leftists, gangsters, zealots, and lovers, all in the hope of finding something resembling justice for a friend.

Master storyteller and crime fiction legend Gary Phillips has filled the pages of One-Shot Harry with fascinating historical cameos, wise-cracks, tenderness, and an edge-of-your-seat thrill ride of a plot with consequences far beyond one dead body.

"For thirty years Phillips has been a must-read writer, and One-Shot Harry is probably his best ever--tense and suspenseful, of course, but also deep, resonant and intelligent. It's a story that needed to be told, and therefore a book that needs to be read."--Lee Child

"Few books are able to capture the essence and vibe of classic hardboiled fiction and still manage to make the prose feel modern and of-the-moment. Gary Phillips does just that with One-Shot Harry and the memorable titular protagonist, Harry Ingram. This book is a swift uppercut of gritty storytelling that will keep you hungrily turning the pages, loaded with moments that will linger in your mind long after you've finished reading."--Alex Segura, author of Secret Identity, Blackout , and Miami Midnight

Culprits: The Heist Was Just the Beginning (Paperback)

Matthew Henson and the Ice Temple of Harlem (Paperback)

The Faking of the President: Nineteen Stories of White House Noir (Paperback)

That Left Turn at Albuquerque (Paperback)