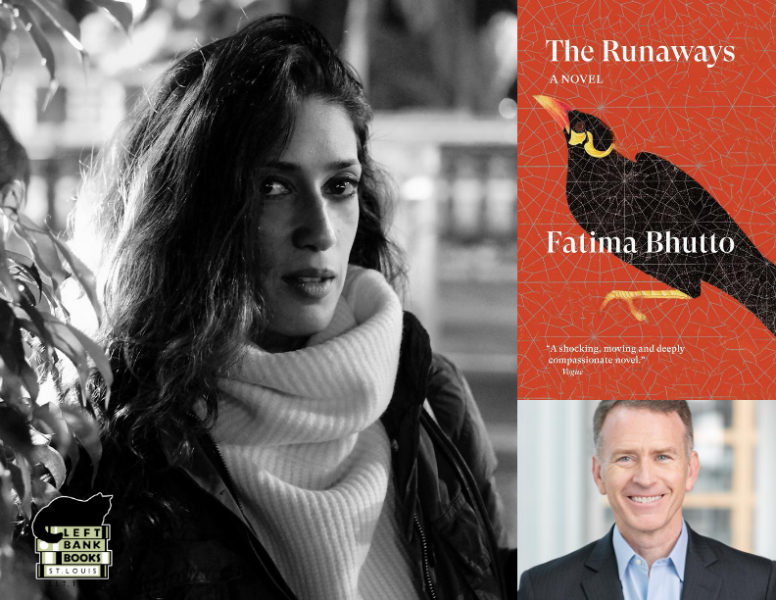 Left Bank Books welcomes award-winning author Fatima Bhutto, who will discuss her new novel, The Runaways, on Facebook Live at 3pm CDT on August 19. Bhutto will be in conversation with NPR's Morning Edition host Steve Inskeep. Join us on our Facebook Page and order a copy of The Runaways from Left Bank Books to support authors and independent bookstores!

"Dazzling. A novel that holds up to scrutiny a world of claustrophobic war zones, virulent social media and cities collapsing upon themselves, and then sets it down again, transformed by the grace of storytelling." – Siddartha Deb, author of The Point of Return

Anita lives in Karachi’s biggest slum. Her mother is a maalish wali, paid to massage the tired bones of rich women. But Anita's life will change forever when she meets her elderly neighbour, a man whose shelves of books promise an escape to a different world.

On the other side of Karachi lives Monty, whose father owns half the city and expects great things of him. But when a beautiful and rebellious girl joins his school, Monty will find his life going in a very different direction.

Sunny's father left India and went to England to give his son the opportunities he never had. Yet Sunny doesn't fit in anywhere. It's only when his charismatic cousin comes back into his life that he realises his life could hold more possibilities than he ever imagined.

These three lives will cross in the desert, a place where life and death walk hand in hand, and where their closely guarded secrets will force them to make a terrible choice.

“As compassionate as it is trenchant, this rare fiction is an illuminating guide through the great disorder of our times.” —Pankaj Mishra

“Fatima Bhutto vividly renders the seductions of Islamic radicalization in such a way that we understand both its historical specificity and its universal roots in idealism and desire, rage and romance, youth and rebellion. Drawn from the headlines but plunging much deeper, The Runaways is a novel for our difficult times.” —Viet Thanh Nguyen

Fatima Bhutto was born in Kabul, Afghanistan and grew up between Syria and Pakistan. She is the author of five previous books of fiction and nonfiction. Her debut novel, The Shadow of the Crescent Moon, was long listed for the Bailey’s Women’s Prize for Fiction and the memoir about her father’s life and assassination, Songs of Blood and Sword, was published to acclaim. Her most recent book is The Runaways. She graduated from Barnard with a degree in Middle Eastern Languages and Cultures and has a masters in South Asian Government and politics from SOAS. Follow her on Twitter and Instagram at @fbhutto.

Steve Inskeep is a host of NPR's Morning Edition, as well as NPR's morning news podcast Up First. In 2003, he received a National Headliner Award for investigating a military raid gone wrong in Afghanistan. He has twice been part of NPR News teams awarded the Alfred I. duPont-Columbia University Silver Baton for coverage of Iraq. Inskeep is the author of Instant City: Life and Death in Karachi, Jacksonland, and, most recently, Imperfect Union.

The Runaways: A Novel (Paperback)