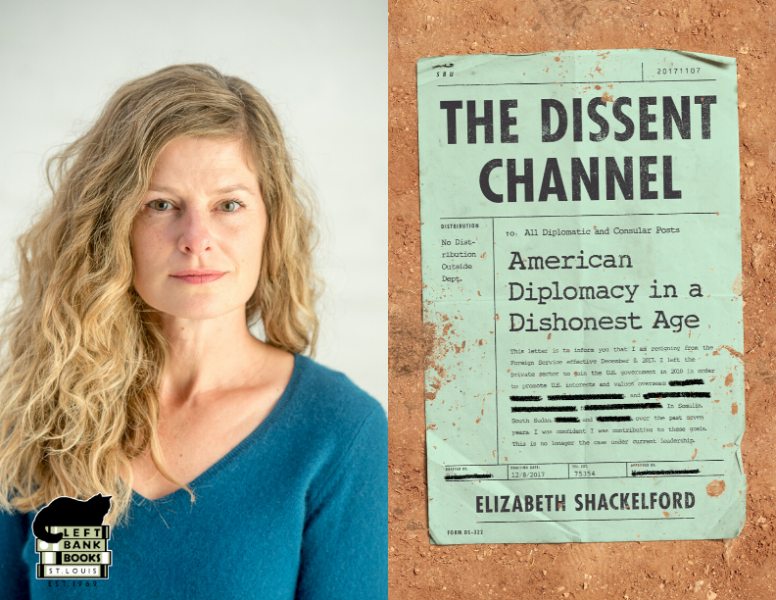 Left Bank Books welcomes former U.S. State Department diplomat Elizabeth Shackelford, who will discuss her new book, The Dissent Channel: American Diplomacy in a Dishonest Age, on Facebook Live at 7pm CST on June 23. Shackelford will be in conversation with St. Louis Public Radio's Jason Rosenbaum. Join us on our Facebook Page and order copies of The Dissent Channel from Left Bank Books to support authors and independent bookstores!

A young diplomat's account of her assignment in South Sudan, a firsthand example of US foreign policy that has failed in its diplomacy and accountability around the world.

In 2017, Elizabeth Shackelford wrote a pointed resignation letter to her then boss, Secretary of State Rex Tillerson. She had watched as the State Department was gutted, and now she urged him to stem the bleeding by showing leadership and commitment to his diplomats and the country. If he couldn't do that, she said, "I humbly recommend that you follow me out the door."

With that, she sat down to write her story and share an urgent message.

In The Dissent Channel, former diplomat Elizabeth Shackelford shows that this is not a new problem. Her experience in 2013 during the precarious rise and devastating fall of the world's newest country, South Sudan, exposes a foreign policy driven more by inertia than principles, to suit short-term political needs over long-term strategies.

Through her story, Shackelford makes policy and politics come alive. And in navigating both American bureaucracy and the fraught history and present of South Sudan, she conveys an urgent message about the devolving state of US foreign policy.

"In these norm-shattering times, we urgently need to examine and learn from mistakes of the past. This beautifully written, personal story exposes uncomfortable truths about the costs of America's foreign policy approach and, without cynicism, offers some hope for a better way forward." —Yara Bayoumy, National Security Editor, The Atlantic

Elizabeth Shackelford was a career diplomat in the U.S. State Department until December 2017, when she resigned in protest of the Trump administration. During her tenure with the Foreign Service, Shackelford served in the U.S. embassies in Warsaw, Poland, South Sudan, Somalia, and Washington, D.C. For her work in South Sudan during the outbreak of civil war, Shackelford received the Barbara Watson Award for Consular Excellence, the State Department's highest honor for consular work.

Her resignation letter to Secretary of State Rex Tillerson, first shared by Foreign Policy, went viral. Since her departure, Shackelford has continued to raise awareness about the consequences of our troubled diplomacy in the press, in academic and community groups, and through other public commentary.

The Dissent Channel: American Diplomacy in a Dishonest Age (Hardcover)