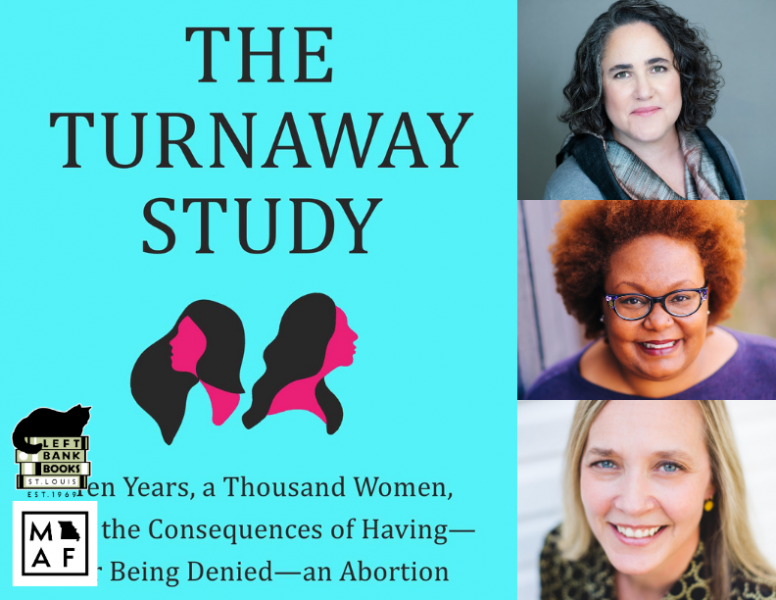 Left Bank Books and Missouri Abortion Fund welcome Director of Research at Advancing New Standards in Reproductive Health (ANSIRH)
Diana Greene Foster,
who will discuss her new book,
The Turnaway Study: Ten Years, a Thousand Women, and the Consequences of Having—or Being Denied—an Abortion,
on our Facebook Live Page at 7:00pm CT on November 18.
Foster will be in conversation with Co-Founder and Co-Director of Reproaction
Pamela Merritt
and Executive Director of the Hope Clinic for Women
Dr. Erin King.
Join us on our Facebook Live Page and order a copy of
The Turnaway Study
from Left Bank Books to support authors and independent bookstores!

About The Turnaway Study

A groundbreaking and illuminating look at the state of abortion access in America and the first long-term study of the consequences—emotional, physical, financial, professional, personal, and psychological—of receiving versus being denied an abortion on women’s lives.

What happens when a woman seeking an abortion is turned away? Diana Greene Foster, PhD, decided to find out. With a team of scientists—psychologists, epidemiologists, demographers, nursing scholars, and public health researchers—she set out to discover the effect of receiving versus being denied an abortion on women’s lives. Over the course of a ten-year investigation that began in 2007, she and her team followed a thousand women from more than twenty states, some of whom received their abortions, some of whom were turned away.

Now, for the first time, the results of this landmark study—the largest of its kind to examine women’s experiences with abortion and unwanted pregnancy in the United States—have been gathered together in one place. Here Foster presents the emotional, physical, and socioeconomic outcomes for women who received their abortion and those who were denied. She analyzes the impact on their mental and physical health, their careers, their romantic lives, their professional aspirations, and even their existing and future children—and finds that women who received an abortion were almost always better off than women who were denied one. Interwoven with these findings are ten riveting first-person narratives by women who share their candid stories.

As the debate about abortion rights intensifies, The Turnaway Study offers an in-depth examination of the real-world consequences for women of being denied abortions and provides evidence to refute the claim that abortion harms women. With brilliant synthesis and startling statistics—that thousands of American women are unable to access abortions; that 99% of women who receive an abortion do not regret it five years later—The Turnaway Study is a necessary and revelatory look at the impact of abortion access on people’s lives.

“If you read only one book about democracy, The Turnaway Study should be it. Why? Because without the power to make decisions about our own bodies, there is no democracy." —Gloria Steinem

“Dr. Diana Greene Foster brings what is too often missing from the public debate around abortion: science, data, and the real-life experiences of people from diverse backgrounds…This should be required reading for every judge, member of Congress, and candidate for office—as well as anyone who hopes to better understand this complex and important issue.” —Cecile Richards, cofounder of Supermajority, former president of Planned Parenthood, and author of Make Trouble

Diana Greene Foster is a professor at the University of California, San Francisco (UCSF) in the Department of Obstetrics, Gynecology, and Reproductive Sciences and director of research at Advancing New Standards in Reproductive Health (ANSIRH). An internationally recognized expert on women’s experiences with contraception and abortion, she is the principal investigator of the Turnaway Study. She has a bachelor’s of science from the University of California, Berkeley, and a doctorate from Princeton University. She lives with her husband and two children in the San Francisco Bay Area.

Pamela Merritt is Co-Founder and Co-Director of Reproaction, a national organization that leads bold action to increase access to abortion and advance reproductive justice. Pamela was a 2017 Reproductive Health, Rights, and Justice Fellow at the Rockwood Leadership Institute, and she serves on the Board of Directors for the Guttmacher Institute and NARAL Pro-Choice Missouri. Her writing has been published in the Chicago Sun-Times, the Guardian, and Rolling Stone. Pamela lives in Southern Illinois, and enjoys St. Louis Blues hockey and spending time with her rescue dogs. Follow her on Twitter @SharkFu.

Erin King, MD is the Executive Director of the Hope Clinic for Women in Granite City, Illinois. Hope Clinic is an independent clinic that has been providing abortion care in the St. Louis region for over 40 years. Being in Illinois has become critical since 2019 while across the Mississippi River, just a few miles away, the state of Missouri has eliminated nearly all access to abortion. Providing abortion care has been central to Dr. King's career as a board certified obstetrician/gynecologist. Living in Missouri has solidified her commitment to reproductive healthcare advocacy.

Our mission at Missouri Abortion Fund (MoAF) (formerly Gateway Women’s Access Fund) is to provide public education and support for people needing reproductive health services, primarily by providing financial assistance to Missouri residents who cannot afford the full cost of abortion care. MoAF works directly with clinics on behalf of the people we serve. When a clinic we work with sees a patient who needs assistance, MoAF is a potential funding source to which they turn for a portion of the cost. The clinic then bills us for the amount we commit to covering.

The Turnaway Study: Ten Years, a Thousand Women, and the Consequences of Having—or Being Denied—an Abortion (Hardcover)