This event has been postponed. We will reschedule this event as soon as possible. Check back for details. 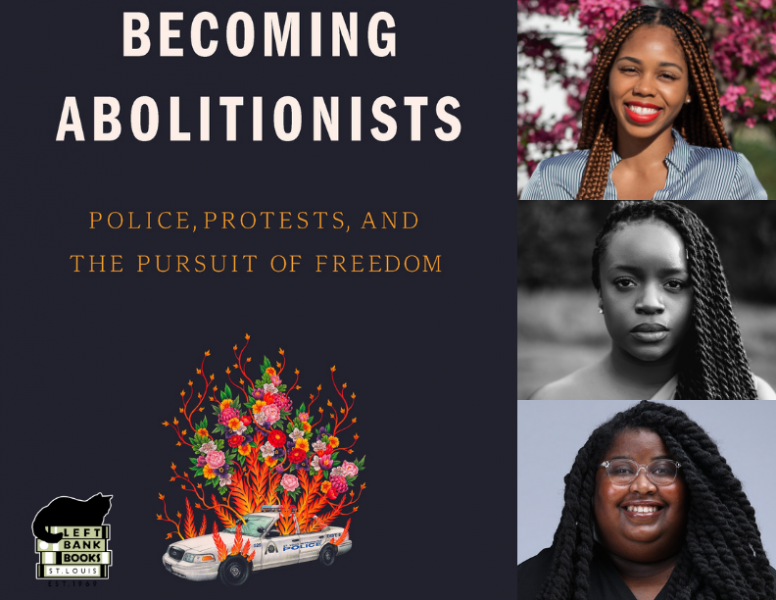 Left Bank Books welcomes human rights lawyer, writer, organizer, and St. Louis native
Derecka Purnell,
who will discuss her highly anticipated book,
Becoming Abolitionists,
on our Facebook Live Page at 6pm CT on October 13th.
Purnell will be in conversation with
Brittany Packnett Cunningham &
Kayla Reed.
Join us on our Facebook Live Page and order a copy of
Becoming Abolitionists: Police, Protests, and the Pursuit of Freedom
from Left Bank Books to support authors and independent bookstores!
Left Bank Books is proud to offer personalized bookplates signed by Derecka Purnell for this event. This is an exclusive offer. More information can be found here.
About Becoming Abolitionists: Police, Protests, and the Pursuit of Freedom
"An informed, provocative, astute consideration of salvific alternatives to contemporary policing and imprisonment." -- Starred Review, Kirkus

"With deep insight and moral clarity, Purnell invites us not only to imagine a world without police, but to muster the courage to fight for the more just world we know is possible. Becoming Abolitionists is essential reading for our times." -- Michelle Alexander, bestselling author of The New Jim Crow

"At once specific and sweeping, practical and visionary, Becoming Abolitionists is a triumph of political imagination and a tremendous gift to all movements struggling towards liberation. Do not miss its brilliance!" -- Naomi Klein, bestselling author of The Shock Doctrine

For more than a century, activists in the United States have tried to reform the police. From community policing initiatives to increasing diversity, none of it has stopped the police from killing about three people a day. Millions of people continue to protest police violence because these solutions do not match the problem: the police cannot be reformed.

In Becoming Abolitionists, Purnell draws from her experiences as a lawyer, writer, and organizer initially skeptical about police abolition. She saw too much sexual violence and buried too many friends to consider getting rid of police in her hometown of St. Louis, let alone the nation. But the police were a placebo. Calling them felt like something, and something feels like everything when the other option seems like nothing.

Purnell details how multi-racial social movements rooted in rebellion, risk-taking, and revolutionary love pushed her and a generation of activists toward abolition. The book travels across geography and time, and offers lessons that activists have learned from Ferguson to South Africa, from Reconstruction to contemporary protests against police shootings.

Here, Purnell argues that police can not be reformed and invites readers to envision new systems that work to address the root causes of violence. Becoming Abolitionists shows that abolition is not solely about getting rid of police, but a commitment to create and support different answers to the problem of harm in society, and, most excitingly, an opportunity to reduce and eliminate harm in the first place.

"Becoming Abolitionists is part memoir & part manifesto for our times. Beautifully written, the book takes the reader on a personal journey from the Midwest to South Africa with a pit stop in New England. As a member of the 'Trayvon Generation, ' Derecka offers us invaluable insights into how young activists are navigating and challenging current injustices. If you've been curious about the modern abolitionist movement, this book is a must read!" -- Mariame Kaba, bestselling author of We Do This Til We Free Us

Derecka Purnell is a human rights lawyer, writer, and organizer. She received her JD from Harvard Law School, and works to end police and prison violence by providing legal assistance, research, and training to community-based organizations through an abolitionist framework. Her work and writing has been featured in the New York Times, NPR, The Atlantic, the Boston Globe, Harper's Bazaar, Cosmopolitan, The Appeal, Truthout, Slate, and many other publications. Derecka is currently a columnist at the Guardian.

Brittany Packnett Cunningham is a leader at the intersection of culture and justice. She is an NBC News and MSNBC Contributor, 2020 Fellow at Harvard’s Institute of Politics, and host of UNDISTRACTED, a news and justice podcast with an intersectional lens on the world. A lifelong activist and proud member of the Ferguson Uprising, Brittany was co-host of the 2019 iHeart Radio Best Political Podcast, Pod Save The People, for three years. Brittany is the Founder and Principal of Love & Power Works a full-service social impact firm focused on creating justice and equity in every sector. In the past, Brittany held top roles at Teach For America, was a Congressional policy advisor, and co-founded Campaign Zero.

Kayla Reed (she/her) is a Black, queer feminist organizer and strategist from St. Louis, Missouri. Kayla is the co-founder and Executive Director of Action St. Louis and Action St. Louis Power Project, grassroots racial justice organizations founded after the 2014 Ferguson Uprising that work to build Black political power. In her role, she has led campaigns that have resulted in the election of progressive Black candidates throughout the St. Louis region and led issue campaigns around housing, voting rights and abolition. Kayla is also a lead strategist in the Movement for Black Lives, where she co-founded the Electoral Justice Project (EJP), a national campaign of the Movement for Black Lives, that seeks to challenge electoral injustice, expand and mobilize the Black electorate and strengthen the capacity of Black-led organizations building power across the U.S.

Becoming Abolitionists: Police, Protests, and the Pursuit of Freedom (Hardcover)