David Swinson with Joe Ide - City on the Edge 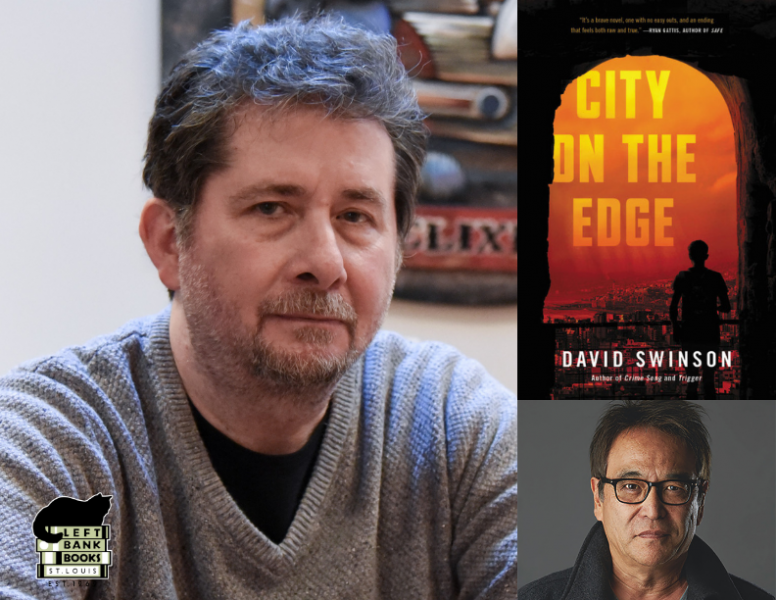 Left Bank Books welcomes author and retired police detective
David Swinson,
who will discuss his new book,
City on the Edge,
on our Facebook Live Page at 7pm CT on June 8.
Swinson will be in conversation with acclaimed author of the IQ Novels
Joe Ide.
Join us on our Facebook Live Page and order a copy of
City on the Edge
from Left Bank Books to support authors and independent bookstores!
About City on the Edge
An American teen living abroad discovers the truth about himself and his family in this thrilling novel from "one of the best dialogue hounds in the business" (New York Times Book Review).
In the wake of a baffling tragedy, 13-year-old Graham moves with his family to Beirut, Lebanon, a city on the edge of the sea and cataclysmic violence. Inquisitive and restless by nature, Graham suspects his State Department father is a CIA operative, and that their family's fragile domesticity is merely a front for American efforts along the nearby Israeli border. Over the course of one year, 1972, Graham's life will utterly change. Two men are murdered, his parent's marriage disintegrates, and Graham, along with his two ex-pat friends, run afoul of forces they cannot understand.
The City on the Edge is elegiac, atmospheric, and utterly authentic. It's the story of innocents caught within the American net of espionage, of the Lebanese transformed by such interference, of the children who ran dangerously beside the churning wheel of history. One part Stephen King's "The Body" and another John le Carre's A Perfect Spy, it's a transformative crime story told with heart and genuine experience.
A Deadly Pleasure Book to Look Forward to in 2021
"Swinson offers the reader a deeply felt coming-of-age novel set against a background of powerful authenticity. This is not to be missed." -- Publishers Weekly
"It's a brave novel, one with no easy outs, and an ending that feels both raw and true." --Ryan Gattis, author of Safe

David Swinson grew up in Washington, DC, Beirut, Mexico City and Stockholm, the son of a foreign service officer. He is a retired police detective from the Metropolitan Police Department in Washington, DC, having been assigned to Major Crimes. Swinson is the author of The Second Girl, Crime Song and Trigger. He lives with his wife and daughter in Northern Virginia.

Joe Ide is of Japanese American descent. Growing up in South Central Los Angeles, Joe's favorite books were the Conan Doyle Sherlock Holmes stories. The idea that a person could face the world and vanquish his enemies with just his intelligence fascinated him. Joe went on to earn a graduate degree and had several careers before writing his debut novel, IQ, inspired by his early experiences and his love of Sherlock Holmes. Joe lives in Santa Monica, California.

City on the Edge (Hardcover)