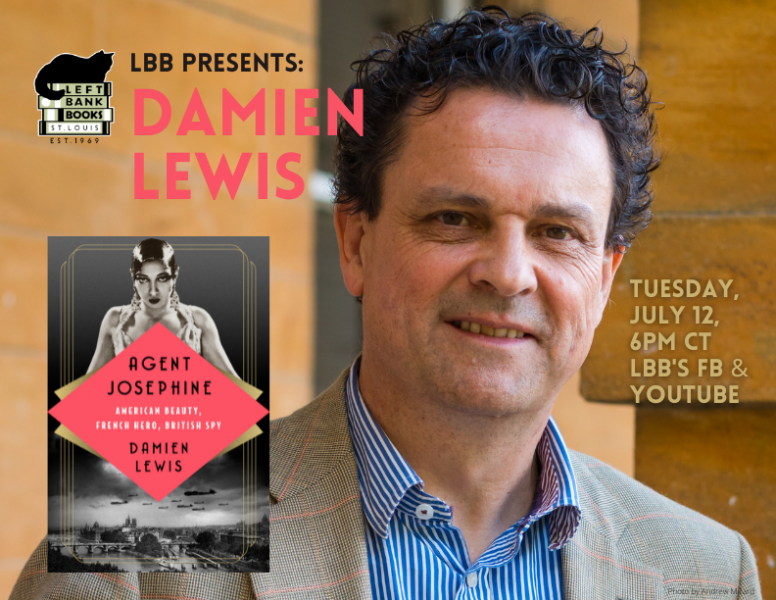 Left Bank Books welcomes debut award winning British author and reporter,
Damien Lewis,
who will discuss the "fascinating and riveting"
Agent Josephine: American Beauty, French Hero, British Spy,
on our Facebook Live Page at 6pm CT on July 12th.
Lewis will be in conversation with TBA.
Join us on our YouTube & Facebook Live Page and order a copy of
Agent Josephine: American Beauty, French Hero, British Spy
from Left Bank Books to support authors and independent bookstores!
Damien Lewis is an award-winning writer who spent twenty years reporting from war, disaster, and conflict zones for the BBC and other global news organizations. He is the bestselling author of more than twenty books, many of which are being adapted into films or television series, including military history, thrillers, and several acclaimed memoirs about military working dogs. Lewis lives in Dorchester, England.

Singer. Actress. Beauty. Spy. During WW2, Josephine Baker, the world's richest and most glamorous entertainer, was an Allied spy in Occupied France. This is the story of her heroic personal resistance to Nazi Germany.

Prior to World War II, Josephine Baker was a music hall diva renowned for her singing and dancing, her beauty and sexuality; she was the most highly-paid female performer in Europe. When the Nazis seized her adopted city, Paris, she was banned from the stage, along with all 'negroes and Jews'. Yet, instead of returning to America, she vowed to stay and to fight the Nazi evil. Overnight she went from performer to Resistance spy.

In Agent Josephine best-selling author Damien Lewis uncovers this little known history of the famous singer's life. During the years of the war, as a member of the French Nurse paratroopers--a cover for her spying work--she participated in numerous clandestine activities and emerged as formidable spy. In turn, she was a hero of the three countries in whose name she served: the US, the nation of her birth; France, the land that embraced her during her adult career; and Britain, the country from which she took her orders, as one of London's most closely-guarded special agents. Baker's secret war embodies a tale of unbounded courage, passion, devotion and sacrifice, and of deep and bitter tragedy, fueled by her own desire to combat the rise of Nazism, and to fight for all that is good and right in the world.

Drawing on a plethora of new historical material and rigorous research, including previously undisclosed letters and journals, Lewis upends the conventional story of Josephine Baker, revealing that her mark on history went far beyond the confines of the stage.

"Fascinating and riveting. What a story! It has never been told properly, if ever, before now. I know Josephine would be very proud of how she is portrayed."-- Jean-Pierre Reggiori, Josephine Baker's dance partner

"Damien Lewis's ten years of research into Josephine Baker's world as an operative for the allies during WWII takes her story to new heights. Escaping from the legend of a scantily clad singer/dancer who entertained the world, wartime Agent Josephine shines as bright as a beacon, shimmering with defiance, fierce in loyalty to her adopted France, and fully engaged in the collection and passage of intelligence. The love story that serves as a backdrop to her exploits resonates profoundly."-- Jonna Mendez, author of The Moscow Rules

"Astonishing. Exhilarating. Agent Josephine captures the indomitable spirit of Josephine Baker. Under the dark skies of WWII, Josephine stared down the German occupation of France to become a master spy, risking her life in service of the French Resistance and the British Secret Intelligence Services--all while expressing the depth and wholeness of her character as a loyal friend and captivating entertainer. Working beyond the limits of endurance, she inspired diplomats, statesmen, spies, Moroccan Berber chieftains and battalions of allied troops to fight the Nazis and their ideals. Josephine's odyssey calls to the resilience and creative tenacity that hides within all of us and bursts forth in the souls of a chosen few in extreme circumstances. Gripping as a thriller and superbly written. Everyone should read it."-- Scott Lenga, author of The Watchmakers

After fleeing the poverty and racism of St. Louis, Mo., to seek fame and fortune in Europe, Josephine Baker (1906-1975) gave "the greatest performance of her life" as a WWII spy, according to this scintillating biography. Historian Lewis (Churchill's Band of Brothers) draws on newly discovered letters and diaries to paint a vivid portrait of Baker as "a chameleon, a rebel, a warrior, and a rule-breaker at heart." Recruited by French intelligence officials in 1939, Baker's first assignment was to befriend an attaché at the Italian embassy in Paris and find out if Mussolini planned to form an alliance with Hitler. She also helped determine Japan's wartime intentions, identified Abwehr agents in Paris, and ferried classified intelligence--written in invisible ink on musical scores--across enemy lines. In addition to her espionage work, Baker flew aid missions to refugees and entertained U.S. troops and dignitaries at the Liberty Club in Casablanca. Lewis stuffs the narrative with intriguing digressions about wartime intelligence activities, including a U.S. plan to help the Mafia smuggle cigarettes into Morocco in exchange for intelligence, and vividly evokes the "intense and tumultuous affair" between Baker and her chief handler, Jacques Abtey. The result is a thrilling espionage story perfect for fans of Lynne Olson's Madame Fourcade's Secret War. (July)

The Dog Who Could Fly: The Incredible True Story of a WWII Airman and the Four-Legged Hero Who Flew At His Side (Paperback)

Churchill's Band of Brothers: WWII's Most Daring D-Day Mission and the Hunt to Take Down Hitler's Fugitive War Criminals (Hardcover)