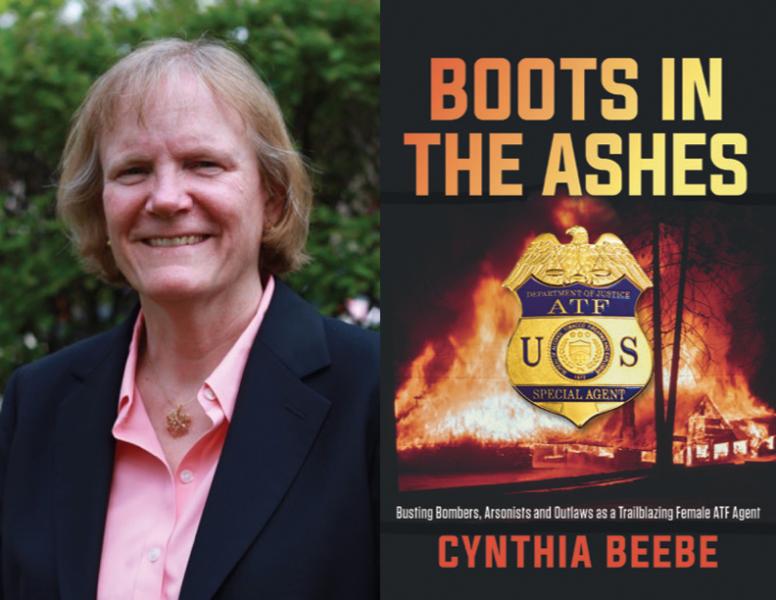 Following recommendations from the CDC, we regret that this event is POSTPONED. Please check back for updates.

Left Bank Books welcomes  retired Senior Special Agent with the U.S. Bureau of Alcohol, Tobacco, Firearms and Explosives (ATF), Cynthia Beebe, who will sign and dsicus her memoir about being one of the first women special agents for the ATF, Boots In The Ashes.

Boots in the Ashes is the memoir of Cynthia Beebe's groundbreaking career as one of the first women special agents for the Bureau of Alcohol, Tobacco, Firearms and Explosives, (ATF). A smart and independent girl growing up in suburban Chicago, she unexpectedly became one of the first women to hunt down violent criminals for the federal government.

As a special agent for 27 years, Beebe gives the reader first-hand knowledge of the human capacity for evil. She tells the story of how, as a young woman, she overcame many obstacles on her journey through the treacherous world of illegal guns, gangs, and bombs. She battled conflicts both on the streets and within ATF. But Beebe learned how to thrive in the ultra-masculine world of violent crime and those whose job it is to stop it.

Beebe tells her story through the lens of six major cases that read like crime fiction: four bombings, one arson fire and a massive roundup of the Hell's Angels on the West Coast. She also shares riveting never before revealed trial testimonies, including killers, bombers, arsonists, victims, witnesses and judges.

Cynthia Beebe is a retired Senior Special Agent with the U.S. Bureau of Alcohol, Tobacco, Firearms and Explosives (ATF). She spent 27 years investigating bombings, arson, murder, illegal firearms, gangs and other crimes. Her cases were chronicled in the New York Times, Chicago Tribune and Ladies Home Journal, and were covered on ABC, CBS, NBC, CNN, and 48 Hours. She was the first woman to earn the coveted "Top Gun" award at the ATF Academy, where she later worked as an instructor. Beebe is a member of the International Association of Bomb Technicians and Investigators, the International Association of Arson Investigators and Women in Federal Law Enforcement. She has a B.A. in English Literature and a Master's Degree in Journalism, both from Northwestern University, which she attended on an athletic scholarship. Since her retirement she has appeared as an expert commentator on law enforcement issues for WGN radio and television. She lives with her son in a suburb of Chicago.

This event is free and open to the public, but proof of purchase of Boots in the Ashes from Left Bank Books will be required to enter the signing line.

Boots in the Ashes: Busting Bombers, Arsonists and Outlaws as a Trailblazing Female ATF Agent (Hardcover)