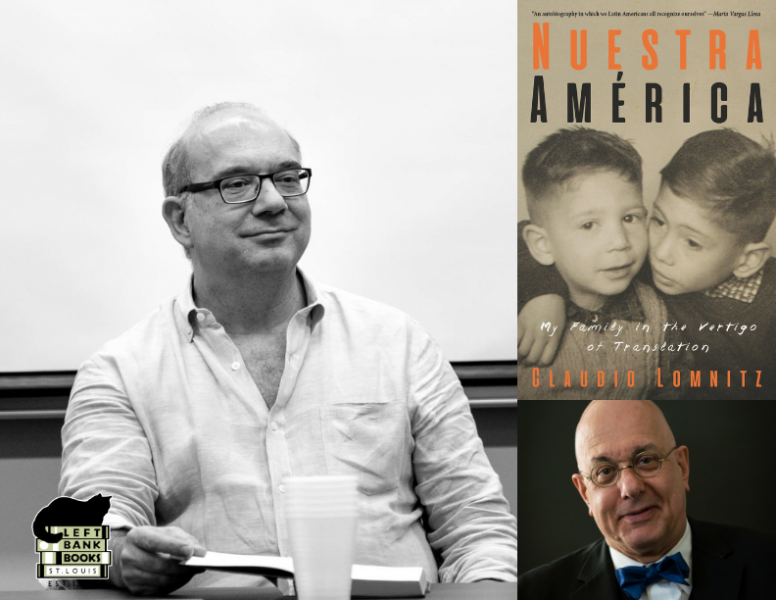 Left Bank Books welcomes anthropologist and historian
Claudio Lomnitz,
who will discuss his new book,
Nuestra América: My Family in the Vertigo of Translation,
on our Facebook Live Page at 3pm CT on February 24.
Lomnitz will be in conversation with President of Bard College
Leon Botstein.
Join us on our Facebook Live Page and order a copy of
Nuestra América
from Left Bank Books to support authors and independent bookstores!

NAMED A MOST ANTICIPATED BOOK OF THE YEAR BY KIRKUS REVIEWS

A riveting study of the intersections between Jewish and Latin American culture, this immigrant family memoir recounts history with psychological insight and the immediacy of a thriller.

In Nuestra América, eminent anthropologist and historian Claudio Lomnitz traces his grandparents’ exile from Eastern Europe to South America. At the same time, the book is a pretext to explain and analyze the worldview, culture, and spirit of countries such as Peru, Colombia, and Chile, from the perspective of educated Jewish emigrants imbued with the hope and determination typical of those who escaped Europe in the 1920s.

Lomnitz’s grandparents, who were both trained to defy ghetto life with the pioneering spirit of the early Zionist movement, became intensely involved in the Peruvian leftist intellectual milieu and its practice of connecting Peru’s indigenous past to an emancipatory internationalism that included Jewish culture and thought. After being thrown into prison supposedly for their socialist leanings, Lomnitz’s grandparents were exiled to Colombia, where they were subject to its scandals, its class system, its political life. Through this lens, Lomnitz explores the almost negligible attention and esteem that South America holds in US public opinion. The story then continues to Chile during World War II, Israel in the 1950s, and finally to Claudio’s youth, living with his parents in Berkeley, California, and Mexico City.

“An autobiography in which we Latin Americans all recognize ourselves.” —Mario Vargas Llosa, winner of the 2010 Nobel Prize in Literature

“This is a brilliant and beautifully written book. Based on personal memories, archival research, and impassioned listening, Lomnitz narrates how his Jewish family coped with violence and dispersion, and reflects on the depths out of which they found strength to begin life anew. The story of his grandfather’s collaboration with Mariátegui in Peru uncovers an inspiring chapter on the creation of intellectual and political communities. Lomnitz brings new meaning to Nuestra América as a necessary place for active new beginnings, which he has inherited.” —Arcadio Díaz-Quiñones, Princeton University, author of La memoria rota

Claudio Lomnitz is an anthropologist, historian, and critic who works broadly on Latin American culture and politics. He is Professor of Anthropology at Columbia University. Lomnitz’s books include Death and the Idea of Mexico and The Return of Comrade Ricardo Flores Magón, among many others. As a regular columnist in the Mexico City paper La Jornada and an award-winning dramaturgist, he is committed to bringing historical and anthropological understanding into public debate.

Leon Botstein is President of Bard College, where he is the Leon Levy Professor in the Arts and Humanities. He serves as music director of the American Symphony Orchestra, The Orchestra Now and the Bard Music Festival. He edits The Musical Quarterly and has written on the history of music and culture in the 19th and 20th centuries. His books include Judentum und Modernität : Essays zur Rolle der Juden in der deutschen und österreichischen Kultur 1848 bis 1938, (1991), Von Beethoven zu Berg: Das Gedächtnis der Moderne (2013) and the co-edited volume, Quasi una fantasia: Juden und die Musikstadt Wien (2003). He serves as Board Chairman of Central European University and is a member of the Fulbright University in Vietnam Board and the Open Society Foundation Global Board. He holds a B.A. from the University of Chicago and a Ph.D. from Harvard University. He is conductor laureate of the Jerusalem Symphony Orchestra where he served as music director from 2003-2010.

Nuestra América: My Family in the Vertigo of Translation (Hardcover)