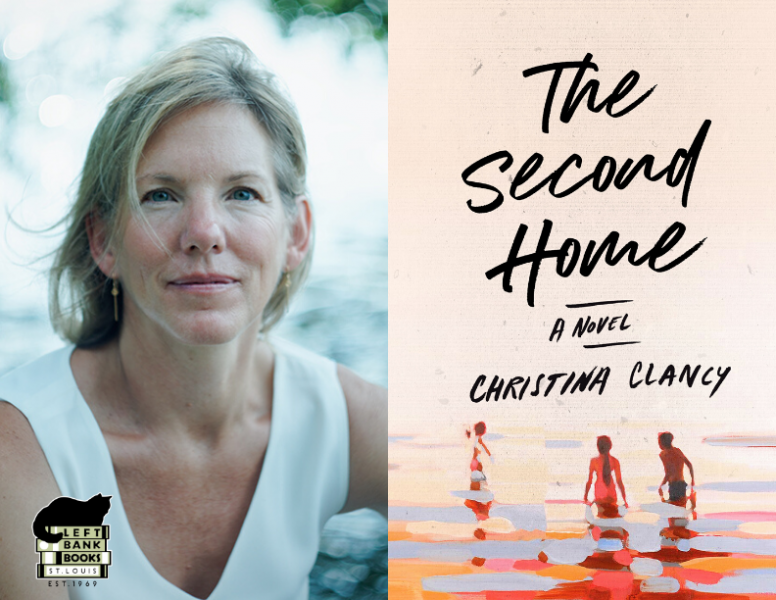 Left Bank Books welcomes author Christina Clancy, who will discuss her debut novel, The Second Home, on Facebook Live at 7pm CST on June 17. Clancy will be in conversation with Mike Isaacson, Artistic Director & Executive Producer of The Muny. Join us on our Facebook Page and order a copy of The Second Home from Left Bank Books to support authors and independent bookstores!

Tender and compassionate, incisive and heartbreaking, Christina Clancy's The Second Home is the story of a family you'll quickly fall in love with, and won't soon forget.

After a disastrous summer spent at her family summer home on Cape Cod, seventeen-year-old Ann Gordon was left with a secret that changed her life forever, and created a rift between her sister, Poppy, and their adopted brother, Michael.

Now, fifteen years later, her parents have died, leaving Ann and Poppy to decide the fate of the Wellfleet home that's been in the Gordon family for generations. For Ann, the once-beloved house is tainted with bad memories. Poppy loves the old saltbox, but after years spent chasing waves around the world, she isn't sure she knows how to stay in one place.

Just when the sisters decide to sell, Michael re-enters their lives with a legitimate claim to the house. But more than that, he wants to set the record straight about that long ago summer. Reunited after years apart, these very different siblings must decide if they can continue to be a family—and the house just might be the glue that holds them together.

Told through the shifting perspectives of Ann, Poppy, and Michael, this assured and affecting debut captures the ache of nostalgia for summers past and the powerful draw of the places we return to again and again. It is about second homes, second families, and second chances.

"Christina Clancy writes with warmth, wit, and wisdom about fantastically human characters. A novel of family and place and belonging for fans of Ann Packer and J. Courtney Sullivan." --Rebecca Makkai, Pulitzer Prize finalist for The Great Believers

"I gobbled The Second Home in a matter of days, fully invested in the history, hurt, and hopes of this very human family. Christina Clancy writes with empathy and rich detail: to read about the Gordons is to smell the pine and oak of Wellfleet, to tread the well-worn rooms of their eccentric summer home, and to learn all sides of the explosive rift that sent them hurtling in different directions. Tender and suspenseful, Clancy's debut explores the nature of home as well as the nature of family itself--given and chosen." --Chloe Benjamin, New York Times bestselling author of The Immortalists

"A sure-footed ode to the strength of family, the depth of loss, and the power of forgiveness." --J. Ryan Stradal, New York Times best-selling author, Kitchens of the Great Midwest

Christina Clancy teaches English at Beloit College and holds a PhD in Creative Writing from the University of Wisconsin. Her work has appeared in the New York Times, Washington Post, Chicago Tribune, Glimmer Train, and others. The Second Home is her first novel.

The Second Home: A Novel (Hardcover)