Admission to the live event is closed. If you would still like access to the video, just note that in your order for the book. 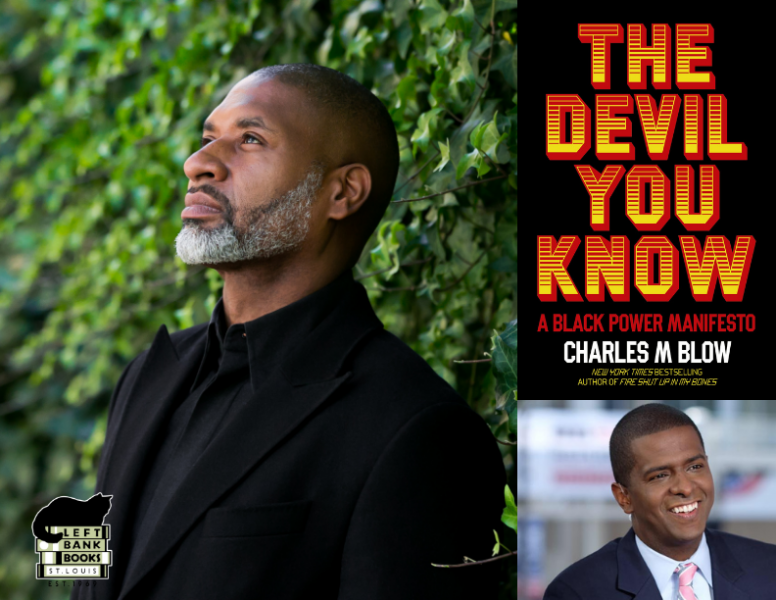 Race, as we have come to understand it, is a fiction; but, racism, as we have come to live it, is a fact. The point here is not to impose a new racial hierarchy, but to remove an existing one. After centuries of waiting for white majorities to overturn white supremacy, it seems to me that it has fallen to Black people to do it themselves.

Acclaimed columnist and author Charles Blow never wanted to write a “race book.” But as violence against Black people—both physical and psychological—seemed only to increase in recent years, culminating in the historic pandemic and protests of the summer of 2020, he felt compelled to write a new story for Black Americans. He envisioned a succinct, counterintuitive, and impassioned corrective to the myths that have for too long governed our thinking about race and geography in America. Drawing on both political observations and personal experience as a Black son of the South, Charles set out to offer a call to action by which Black people can finally achieve equality, on their own terms.

So what will it take to make lasting change when small steps have so frequently failed? It’s going to take an unprecedented shift in power. The Devil You Know is a groundbreaking manifesto, proposing nothing short of the most audacious power play by Black people in the history of this country. This book is a grand exhortation to generations of a people, offering a road map to true and lasting freedom.

“In his provocative manifesto Charles Blow gives us one of the most thrilling experiences as readers: the challenge of imagining an alternate future. Writing in a long tradition of Black visionaries who’ve wrestled with the political implications of place and power, he exhorts African Americans to reconsider the possibilities of home against an historical backdrop of past migrations. Blow is one of our most penetrating thinkers and brilliant essayists, and in The Devil You Know he is putting it all on the line.” — Henry Louis Gates, Jr., Alphonse Fletcher University Professor, Harvard University

CHARLES M. BLOW is an acclaimed journalist and op-ed columnist for the New York Times who appears frequently on CNN. He is the author of the New York Times bestselling memoir Fire Shut Up in My Bones, which has been adapted into an opera by Terence Blanchard that will open the 2021–22 season of the Metropolitan Opera. This will be a historic occasion—the first time an opera by a Black composer appears on the Met stage. He graduated magna cum laude from Grambling State University in Louisiana, where he received a B.A. in mass communications. He lives in Atlanta and has three children.

BAKARI SELLERS made history in 2006 when, at just twenty-two years old, he defeated a twenty-six-year incumbent State Representative to become the youngest member of the South Carolina state legislature and the youngest African American elected official in the nation. In 2014 he was the Democratic Nominee for Lieutenant Governor in the state of South Carolina. Sellers is a CNN political analyst and served in the South Carolina state legislature. Recently named to Time's ""40 Under 40"" list, he is also a practicing attorney who fights to give a voice to the voiceless.

You may purchase a copy of The Devil You Know from Left Bank Books online or by phone. If you opt to only purchase the $5 event ticket, you may do so online.  You must provide an email address to be invited to the private online event. If you have purchased the book or event ticket from Left Bank, you will receive an email event reminder a few days prior to the event. You will receive the actual email invite to join the private online event on the DAY OF the event.

The Devil You Know: A Black Power Manifesto (Hardcover)

My Vanishing Country: A Memoir (Hardcover)