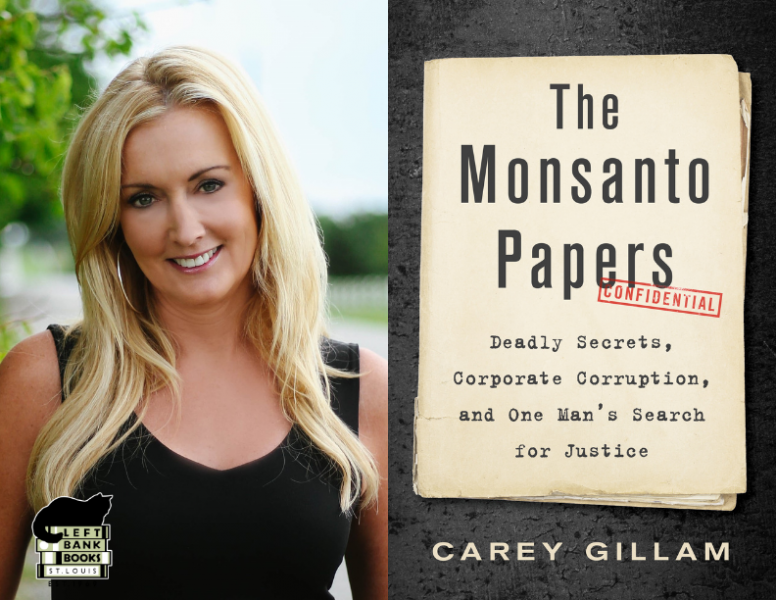 Left Bank Books welcomes investigative journalist
Carey Gillam,
who will discuss her new book,
The Monsanto Papers: Deadly Secrets, Corporate Corruption, and One Man’s Search for Justice,
on our Facebook Live Page at 7pm CT on March 3.
Join us on our Facebook Live Page and order a copy of
The Monsanto Papers
from Left Bank Books to support authors and independent bookstores!

About The Monsanto Papers

Lee Johnson was a man with simple dreams. All he wanted was a steady job and a nice home for his wife and children, something better than the hard life he knew growing up. He never imagined that he would become the face of a David-and-Goliath showdown against one of the world’s most powerful corporate giants. But a workplace accident left Lee doused in a toxic chemical and facing a deadly cancer that turned his life upside down. In 2018, the world watched as Lee was thrust to the forefront of one the most dramatic legal battles in recent history.

The Monsanto Papers is the inside story of Lee Johnson’s landmark lawsuit against Monsanto. For Lee, the case was a race against the clock, with doctors predicting he wouldn’t survive long enough to take the witness stand. For the eclectic band of young, ambitious lawyers representing him, it was a matter of professional pride and personal risk, with millions of dollars and hard-earned reputations on the line. For the public at large, the lawsuit presented a question of corporate accountability. With enough money and influence, could a company endanger its customers, hide evidence, manipulate regulators, and get away with it all—for decades?

Readers will be astounded by the depth of corruption uncovered, captivated by the shocking twists, and moved by Lee’s quiet determination to see justice served. With gripping narrative force that reads like fiction, The Monsanto Papers takes readers behind the scenes of a grueling legal battle, pulling back the curtain on the frailties of the American court system and the lengths to which lawyers will go to fight corporate wrongdoing.

“Gillam narrates an of-the-moment reckoning with a major corporation whose products have been marketed as safe since the 1970s. As an examination of both corporate malfeasance and legal maneuvering in torts cases, Gillam's book personifies the need for consumer protections and safety.” — Booklist

"The Monsanto Papers blends science and human tragedy with courtroom drama in the style of John Grisham. It is a story of corporate malfeasance on a grand scale – a chilling revelation of the chemical industry’s greed, arrogance, and reckless disregard for human life and the health of our planet. It is a must read." — Philip J. Landrigan, MD, Director, Program for Global Public Health and the Common Good, Boston College

Investigative journalist Carey Gillam has spent more than 25 years reporting on corporate America, including 17 years working for Reuters international news agency. Her 2017 book about pesticide dangers, Whitewash: The Story of a Weed Killer, Cancer, and the Corruption of Science, won the 2018 Rachel Carson Book Award from the Society of Environmental Journalists and has become a part of the curriculum in several university environmental health programs. Gillam is currently Research Director for the non-profit consumer group U.S. Right to Know.