Considering recommendations from the CDC, Cara Black now will be in conversation with author Scott Phillips in a Facebook Live discussion. Join us on A NEW DATE, April 8 at 7pm, for this interactive conversation and order a copy of Three Hours in Paris (Cara Scott) and That Left Turn at Albuquerque (Scott Phillips) from Left Bank Books to support authors and independent bookstores! 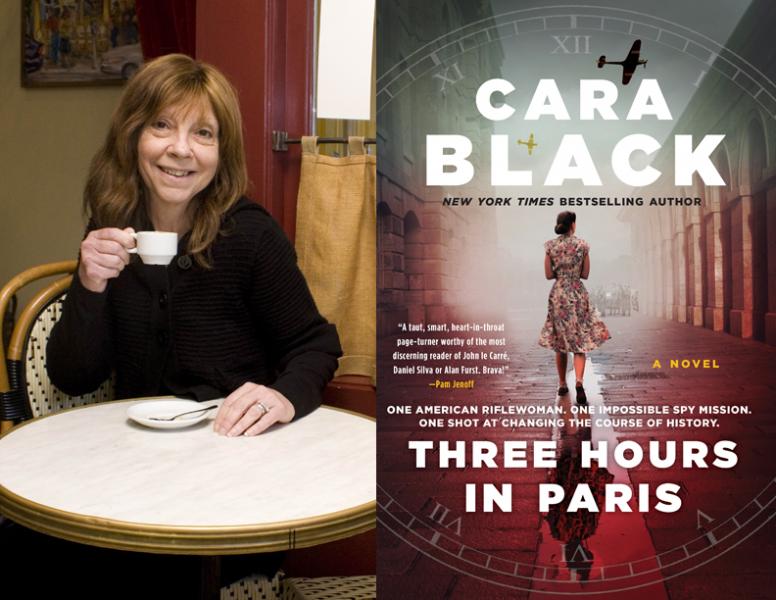 Kate Rees, a young American markswoman, has been recruited by British intelligence to drop into Paris with a dangerous assignment: assassinate the Führer. Wrecked by grief after a Luftwaffe bombing killed her husband and infant daughter, she is armed with a rifle, a vendetta, and a fierce resolve. But other than rushed and rudimentary instruction, she has no formal spy training. Thrust into the red-hot center of the war, a country girl from rural Oregon finds herself holding the fate of the world in her hands. When Kate misses her mark and the plan unravels, Kate is on the run for her life--all the time wrestling with the suspicion that the whole operation was a set-up.

Cara Black is the author of nineteen books in the New York Times bestselling Aimée Leduc series. She has received multiple nominations for the Anthony and Macavity Awards, and her books have been translated into German, Norwegian, Japanese, French, Spanish, Italian, and Hebrew. She lives in San Francisco with her husband and son and visits Paris frequently. Cara Black, doyenne of the Parisian crime novel, is at her best as she brings Occupation-era France to vivid life in this gripping story about one young woman with the temerity--and drive--to take on Hitler himself.

That Left Turn at Albuquerque is written with hard-knock sensibility and wicked humor, great for lovers of Better Call Saul and Pulp Fiction. It features Douglas Rigby, a bankrupt attorney-at-law who has just sunk his last $200,000—a clandestine “loan” from his last remaining client, former bigshot TV exec Glenn Haskill—into a cocaine deal gone wrong. Desperate to get back on top, he formulates an art forgery scheme involving one of Glenn’s priceless paintings, but for Rigby to pull this one off he’ll need to negotiate a whole cast of players with their own agendas, including his wife, his girlfriend, an embittered art forger, Glenn’s resentful nurse, and the man’s money-hungry nephew. One misstep, and it all falls apart.

Scott Phillips is the author of seven novels and numerous short stories. His bestselling debut novel, The Ice Harvest, was a New York Times Notable Book and was adapted into a major motion picture of the same name starring John Cusack and Billy Bob Thornton. Scott is also the recipient of the California Book Award, and was a finalist for the Edgar Award, the Hammett Prize, and the CWA Gold Dagger Award. Scott is a true master of the genre, as lauded by fellow authors such as Blake Crouch, Reed Farrel Coleman, and Ace Atkins (their blurbs below!), so this novel marking his return is something extra special.

That Left Turn at Albuquerque (Hardcover)