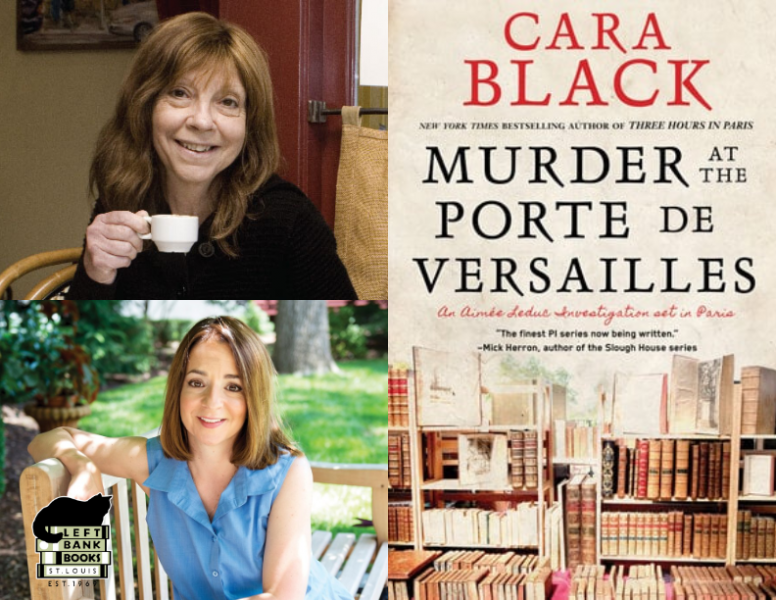 Left Bank Books welcomes internationally bestselling author
Cara Black,
who will discuss the riveting 20th installment in the Aimée Leduc Investigation series
Murder at the Porte de Versailles,
on our Facebook Live Page at 7pm CT on March 21st.
Black will be in conversation with bestselling author
Pam Jenoff.
Join us on our Facebook Live Page and order a copy of
Murder at the Porte de Versailles
from Left Bank Books to support authors and independent bookstores!
About our Speakers

Cara Black is the author of twenty books in the New York Times bestselling Aimée Leduc series as well as the thriller Three Hours in Paris. She has received multiple nominations for the Anthony and Macavity Awards, and her books have been translated into German, Norwegian, Japanese, French, Spanish, Italian, and Hebrew. She lives in San Francisco with her husband and son and visits Paris frequently.

Pam Jenoff is the author of several books of historical fiction, including the bestsellers The Orphan’s Tale and The Lost Girls of Paris, both of which spent multiple weeks on the New York Times and USA Today bestseller lists, among others. She holds a degree in international affairs from George Washington University and a degree in history from Cambridge, and she received her JD from UPenn. Her novels are inspired by her experiences working at the Pentagon and as a diplomat for the State Department handling Holocaust issues in Poland. She lives with her husband and three children near Philadelphia, where she teaches law.

About Murder at the Porte de Versailles

November 2001: in the wake of 9/11, Paris is living in a state of fear. For Aimée Leduc, November is bittersweet: the anniversary of her father's death and her daughter's third birthday fall on the same day. A gathering for family and friends is disrupted when a bomb goes off at the police laboratory--and Boris Viard, the partner of Aimée's friend Michou, is found unconscious at the scene of the crime with traces of explosives under his fingernails.

Aimée doesn't believe Boris set the bomb. In an effort to prove this, she battles the police and his own lab colleagues, collecting conflicting eyewitness reports. When a member of the French secret service drafts Aimée to help investigate possible links to an Iranian Revolutionary guard and fugitive radicals who bombed Interpol in the 1980s, Aimée uncovers ties to a cold case of her father's.

As Aimée scours the streets of the 15th arrondissement trying to learn the truth, she has to ask herself if she should succumb to pressure from Chloe's biological father and move them out to his farm in Brittany. But could Aimée Leduc ever leave Paris?

CrimeReads Most Anticipated Books of 2022

"Black's series is at home on bestseller lists and has long been a particular favorite of librarians and library patrons . . . Set in November 2001, the story unwinds against the backdrop of 9/11 and, more personally, the question of whether Aimée should move to Brittany with her three-year-old daughter, Chloe, and her biological father. Forget it, Aimée: we want you in Paris, not clomping about a farm in Birkenstocks." -- Booklist

Murder in the Marais (An Aimée Leduc Investigation #1) (Paperback)

The Woman with the Blue Star (Paperback)

The Lost Girls of Paris (Paperback)