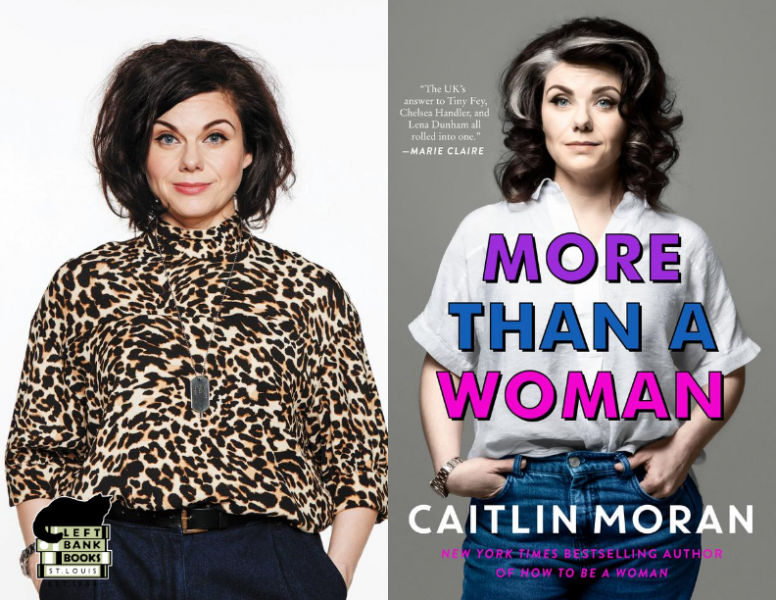 NOTICE: Due to unforeseen circumstances, Caitlin Moran has had to postpone her event with us indefinitely. We will update our events calendar and put a notice on social media (Facebook and Twitter) if/when she is able to reschedule. As an independent bookstore, we do rely heavily on book sales from events, thus we thank you in advance for purchasing More Than a Woman from Left Bank.

The author of the international bestseller How to Be a Woman returns with another “hilarious neo-feminist manifesto” (NPR) in which she reflects on parenting, middle-age, marriage, existential crises—and, of course, feminism.

A decade ago, Caitlin Moran burst onto the scene with her instant bestseller, How to Be a Woman, a hilarious and resonant take on feminism, the patriarchy, and all things womanhood. Moran’s seminal book followed her from her terrible 13th birthday through adolescence, the workplace, strip-clubs, love, and beyond—and is considered the inaugural work of the irreverent confessional feminist memoir genre that continues to occupy a major place in the cultural landscape.

Since that publication, it’s been a glorious ten years for young women: Barack Obama loves Fleabag, and Dior make “FEMINIST” t-shirts. However, middle-aged women still have some nagging, unanswered questions: Can feminists have Botox? Why isn’t there such a thing as “Mum Bod”? Why do hangovers suddenly hurt so much? Is the camel-toe the new erogenous zone? Why do all your clothes suddenly hate you? Has feminism gone too far? Will your To Do List ever end? And WHO’S LOOKING AFTER THE CHILDREN?

As timely as it is hysterically funny, this memoir/manifesto will have readers laughing out loud, blinking back tears, and redefining their views on feminism and the patriarchy. More Than a Woman is a brutally honest, scathingly funny, and absolutely necessary take on the life of the modern woman—and one that only Caitlin Moran can provide.

Caitlin Moran's debut book, How to Be a Woman, was an instant New York Times bestseller. Her first novel, How to Build a Girl, received widespread acclaim and was adapted into a major motion picture starring Beanie Feldstein. People called her follow up novel, How to Be Famous, "hilarious.... wonderfully original." A columnist for the London Times, Caitlin lives in London with her husband and two daughters, and on Twitter @caitlinmoran.

More Than a Woman (Paperback)