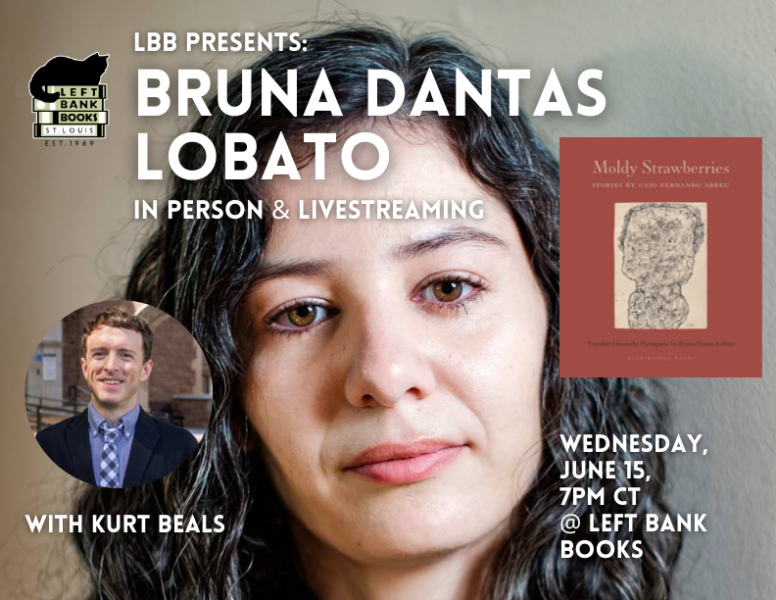 Left Bank Books welcomes Brazilian writer and literary translator living in St. Louis,
Bruna Dantas Lobato,
who will discuss the newly translated
Moldy Strawberries: Stories
by Caio Fernando Abreu
in our store on June 15th at 7pm!
We are so happy to resume in person programming in the store and thrilled to welcome Bruna Dantas Lobato to St. Louis!
Lobato will be in conversation with acclaimed translator
Kurt Beals.
Join us in person in the store or our YouTube & Facebook Live Page.
Order a copy of
Moldy Strawberries: Stories
from Left Bank Books to support authors and independent bookstores!
Bruna will personalize and sign copies for sale from Left Bank Books.
If you are unable to make it in person, leave a personalization note in your online order.
Bruna Dantas Lobato is a Brazilian writer and literary translator based in St. Louis. Her work has appeared in A Public Space, BOMB, Kenyon Review, Los Angeles Review of Books, The Common, and elsewhere. Dantas Lobato has received fellowships from Yaddo, A Public Space, NYU, and the University of Iowa.
Kurt Beals is Associate Professor in the Department of Germanic Languages and Literatures at Washington University in St. Louis, and a translator of German literature into English. He has translated works by Anja Utler, Regina Ullmann, Reiner Stach, and Jenny Erpenbeck, among others. His translation of Anja Utler’s engulf–enkindle was a finalist for the Best Translated Book Award for Poetry and the Northern California Book Award for Poetry in Translation (2011); for Regina Ullmann’s The Country Road he received a PEN/Heim Translation Fund Grant (2014). He also received the first ever German Book Office Translation Prize (2012). His latest translation is Franz Kafka: The Drawings, by Andreas Kilcher and Pavel Schmidt.
Caio Fernando Abreu is one of those authors who is picked up by every generation.

Surreal and gripping stories about desire, tyranny, fear, and love, from one of Brazil's greatest queer writers, whose work is appearing in English for the first time.

In 18 gripping and daring stories filled with tension and intimacy, Caio Fernando Abreu navigates a Brazil transformed by the AIDS epidemic and stifling military dictatorship of the 80s.

- A man speckled with Carnival glitter crosses a crowded dance floor and seeks the warmth and beauty of another body.
- A budding office friendship between two young men turns into a surprising love, "a strange and secret harmony. One man desires another but fears a clumsy word or gesture might tear their plot to pieces.

After so many precarious offerings--a salvaged cigarette, a knock on the door from withing the downpour of a dream, or a tight-lipped smile--Abreu's schemes explode and implode. Junkies, failed revolutionaries, poets, and conflicted artists face threats at every turn. But, inwardly ferocious and secretly resilient, they heal.

For Caio Fernando Abreu there is beauty on the horizon, mingled with luminous memory and decay.

Translated by Bruna Dantas Lobato, currently an Iowa Arts Fellow and MFA candidate in Literary Translation at the University of Iowa.

Caio Fernando Abreu (b. 1948) was one of the most influential Brazilian writers of the 1970s and 80s, despite his work remaining underrecognized outside of Brazil. The author of 20 books, including 12 story collections and two novels, he has been awarded major literary prizes. During the military dictatorship in Brazil (1964-1985), his homoerotic writing was heavily censored and he was soon put on a wanted list, finding refuge in the literary counterculture and eventually by going into self-exile in Europe. In 1994, while living in France, he tested HIV positive. He died two years later in his hometown. He was 47 years old.

Caio Fernando Abreu's Moldy Strawberries introduces one of Brazil's most important and original prose writers to English language readers. Translated with expert nuance and brio by Bruna Dantas Lobato, Abreu's collection depicts the almost forgotten world of 1980s Brazil, a world shaped by military dictatorship, AIDS, and economic crisis, filtered through a rich and multilayered queer sensibility. You will want to add this startling collection to your bookshelf. - John Keene, author of Counternarratives and Annotations

Abreu's writing teems with the desperate and dispirited, beatific loners who are propelled by a gravitational hunger for some shred of authenticity or understanding, for intimate correspondence with another. There are monumental truths to be found in each of these stories, drifting amid the queasy weightlessness of oblivion and craving acknowledgement. Moldy Strawberries is an act of unshakeable compassion. - Justin Walls, Bookshop

Lending an almost painfully humane eye and ear to his characters, Caio Fernando Abreu constructs scenarios of staggering psychological depth from everyday gestures and occasions. Inevitably, devastatingly, readers are destined to meet themselves in his prismatic prose. -- Lucy Ives, author of Loudermilk: Or, The Real Poet; Or, The Origin of the World

Moldy Strawberries gives us an unforgettable portrait of politics and desire as these are written incrementally and achingly in the hearts of Brazilians. Bruna Dantas Lobato's graceful and rhythmically acute translation brings close the loss and longing in Caio Fernando Abreu's profound story sequence. --Rick Moody, author of The Ice Storm

The Words That Remain (Paperback)

Not a Novel: A Memoir in Pieces (Paperback)