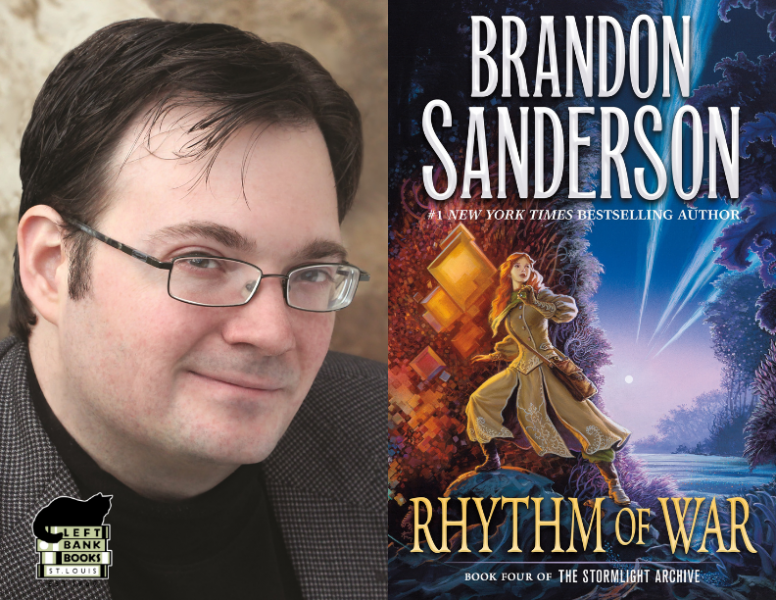 Join #1 New York Times Bestselling author
Brandon Sanderson
for a very special virtual event to commemorate the launch of the eagerly anticipated
Rhythm of War,
the fourth book in the Stormlight Archive, on Tuesday, November 17, 2020, at 8:00 PM ET/7:00 PM CT.
This is an exclusive event that requires purchase of
Rhythm of War
from Left Bank Books for admission.

By purchasing your ticket (purchase of the book) from Left Bank Books, you will receive a signed, numbered copy of the book featuring an exclusive launch-day stamp, special swag, and access to the livestream of this epic night. We have sold out of signed copies. Your purchase of an unsigned copy of Rhythm of War will still get you access to the epic virtual event!!!

The virtual celebration will include Brandon Sanderson speaking about Rhythm of War, answering fan questions, and giving a sneak-peak reading of an upcoming work. Special guests and programming to be announced!  Sanderson fans won't want to miss out on this unique and exciting opportunity to celebrate with fellow fans around the world, from the comfort of their homes.

The Stormlight Archive saga continues in Rhythm of War, the eagerly awaited sequel to Brandon Sanderson's #1 New York Times bestselling Oathbringer, from an epic fantasy writer at the top of his game.

After forming a coalition of human resistance against the enemy invasion, Dalinar Kholin and his Knights Radiant have spent a year fighting a protracted, brutal war. Neither side has gained an advantage, and the threat of a betrayal by Dalinar’s crafty ally Taravangian looms over every strategic move.

Now, as new technological discoveries by Navani Kholin’s scholars begin to change the face of the war, the enemy prepares a bold and dangerous operation. The arms race that follows will challenge the very core of the Radiant ideals, and potentially reveal the secrets of the ancient tower that was once the heart of their strength.

At the same time that Kaladin Stormblessed must come to grips with his changing role within the Knights Radiant, his Windrunners face their own problem: As more and more deadly enemy Fused awaken to wage war, no more honorspren are willing to bond with humans to increase the number of Radiants. Adolin and Shallan must lead the coalition’s envoy to the honorspren stronghold of Lasting Integrity and either convince the spren to join the cause against the evil god Odium, or personally face the storm of failure.

Brandon Sanderson grew up in Lincoln, Nebraska. He lives in Utah with his wife and children and teaches creative writing at Brigham Young University. He is the author of such bestsellers as the Mistborn® trilogy and its sequels, The Alloy of Law, Shadows of Self, and The Bands of Mourning; the Stormlight Archive novels The Way of Kings and Words of Radiance; and other novels, including The Rithmatist and Steelheart. In 2013, he won a Hugo Award for Best Novella for The Emperor's Soul, set in the world of his acclaimed first novel, Elantris. Additionally, he was chosen to complete Robert Jordan's Wheel of Time® sequence.

You may purchase Rhythm of War from Left Bank Books online or over the phone, but you must provide an email address to be invited to the private online event. If you have purchased the book from Left Bank, you will receive an email event reminder a few days prior to the event. You will receive the actual email invite to join the private online event on the DAY OF the event.