Betty Frizzell - If You Can't Quit Cryin', You Can't Come Here No More 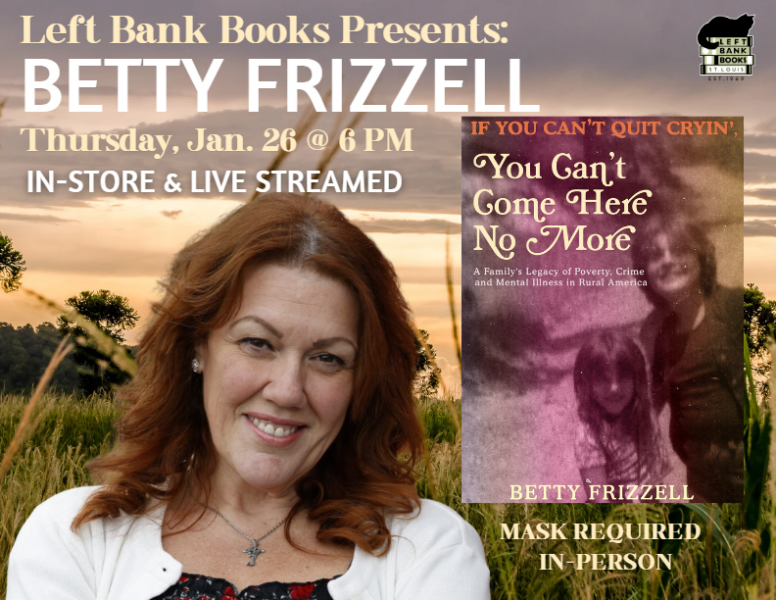 Join us in-store or virtually Jan. 26 @ 6pm
to hear Betty Frizzell discuss her story of how the system failed her family & sister and continues to fail rural America

Order signed & personalized copies of
If You Can't Quit Cryin', You Can't Come Here No More
from Left Bank Books to support authors & independent bookstores!
If unable to make it in person, leave a personalization note in order.
Please RSVP here or view on our YouTube Page
*Masks required for in-person attendance*

About the book:
On May 12, 2013, Betty Frizell's sister, 48-year-old Vicky Isaac of rural Puxico, Missouri loaded a .22 caliber handgun and shot her violent addict husband while he slept in the trailer they shared with Vicky's adult son. Or did she? According to police reports, Vicky called 911 and confessed to the crime.
Was this another sad case of murder amongst addicts or something else?  Vicky was a woman with a history of learning disabilities, traumatic brain injuries, and drug addiction.
Betty Frizzell escaped her family's legacy of crime, addiction, and abuse to become a respected law enforcement officer, police chief of Winfield, Missouri, and teacher of criminal justice. Drawn back to the town and people of her past, Betty works to uncover the truth of murder and her family's history of violence. Her investigation uncovers sad realities about mental illness, small-town politics, and a society that doesn't care about "poor, white trash".  The system in which she believed and trusted, had failed her family.
This is the story of the real "hillbilly elegy."  It's the reality of multi-generational trauma, poverty, and how our society has abandoned millions of Americans to suffer the ravages of a system they don't control.
About the Author:
Betty Frizzell is the former chief of the Winfield, Missouri Police Department. Betty began her law enforcement career in 1997 with an aim to assist victims of sexual assault. She served as a Deputy Sheriff in both the Lincoln and Ripley County (MO) Sheriff's Departments. During her time with the Lincoln County Sheriff's Department, she helped develop the first Sexual Assault Response Teams unit and was the first female officer to join the S.W.A.T. team.
She later worked as a police officer and gang investigator for the city of Louisiana, Missouri before becoming the Chief of the Winfield Police Department.
Upon retiring from policing, Frizzell began teaching criminal justice courses and police as a professor and CTE teacher. She holds an M.F.A in Writing and an M.S. in Criminal Justice Administration. She served as a member of the Citizens Advisory Board for the State of Missouri Department of Corrections: Probation and Parole Division and was honored as the Lincoln County Law Enforcement Officer of the Year in 2001.
She was honored as a Starfish award winner from Seattle Children's Hospital and received an award of recognition from the State of WA Department of Health and Social Services in 2016.
Frizzell currently resides in Seattle, Washington, but remains closely connected to Missouri.
Listen to the St. Louis Public Radio story here
Event address:
399 N. Euclid Ave.
Saint Louis, MO 63108
Books:

If You Can't Quit Cryin', You Can't Come Here No More: A Family's Legacy of Poverty, Crime and Mental Illness in Rural America (Paperback)