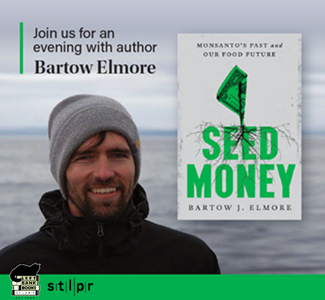 Left Bank Books & St. Louis Public Radio welcome J. Anthony Lukas Work-in-Progress Award and a New America fellowship author
Bartow Elmore,
who will discuss his new book
Seed Money: Monsanto's Past and Our Food Future,
in person at St. Louis Public Radio on October 20th at 7pm Central.
Elmore will be in conversation with St. Louis Public Radio Economic Devolopment Reporter
Corinne Ruff.
Please RSVP and order a copy of
Seed Money: Monsanto's Past and Our Food Future
from Left Bank Books to support authors and independent bookstores!
Books will also be available for sale at the event. Bart will be signing copies after the event.
If you are unable to make it to the in person event,
personalized copies are available to order through Left Bank Books online or over the phone.

About Seed Money: Monsanto's Past and Our Food Future

Monsanto, a St. Louis chemical firm that became the world's largest maker of genetically engineered seeds, merged with German pharma-biotech giant Bayer in 2018--but its Roundup Ready(R) seeds, introduced twenty-five years ago, are still reshaping the farms that feed us.

When researchers found trace amounts of the firm's blockbuster herbicide in breakfast cereal bowls, Monsanto faced public outcry. Award-winning historian Bartow J. Elmore shows how the Roundup story is just one of the troubling threads of Monsanto's past, many told here and woven together for the first time.

A company employee sitting on potentially explosive information who weighs risking everything to tell his story. A town whose residents are urged to avoid their basements because Monsanto's radioactive waste laces their homes' foundations. Factory workers who peel off layers of their skin before accepting cash bonuses to continue dirty jobs. An executive wrestling with the ethics of selling a profitable product he knew was toxic.

Skyrocketing sales of Monsanto's new Roundup Ready system stunned even those in the seed trade, who marveled at the influx of cash and lavish incentives into their sleepy sector. But as new data emerges about the Roundup system, and as Bayer faces a tide of lawsuits over Monsanto products past and present, Elmore's urgent history shows how our food future is still very much tethered to the company's chemical past.

"If you want to know just how Monsanto became so reviled by the sustainable food movement, this gripping tale of greed and corporate power tells all."--Mark Bittman, author of Animal, Vegetable, Junk

"I expect this will become the book on Monsanto."--Edmund Russell, President, American Society for Environmental History

"A timely, powerful, and totally engrossing book. Through stories of farmers, chemists, entrepreneurs, workers, patients, lawyers, and judges, Elmore recounts a devastating history of how chemicals have seeped into almost every cranny of the national and global food supply. We will not fix our health until we fix our food; fixing our food, as this book makes clear, is a tale of politics and power."--Anne-Marie Slaughter, CEO, New America

Bartow J. Elmore teaches environmental and business history at The Ohio State University. For Seed Money, he received the J. Anthony Lukas Work-in-Progress Award and a New America fellowship. He lives with his family in Columbus, Ohio.

Corinne Ruff joined St. Louis Public Radio as the economic development reporter in April, 2019. She grew up among the cornfields in Northern Illinois and later earned degrees in Journalism and French at the University of Illinois at Urbana-Champaign. She has since reported at the international, national and local level on business, education and social justice issues.
Her written work has appeared in a variety of publications including: Retail Dive, The Chronicle of Higher Education, U.S. News & World Report, C-U Citizen Access and The News-Gazette. Before moving to St. Louis to join the public radio family, she worked in Washington D.C. for more than three years. There, she founded the business podcast Conversational Commerce and co-hosted a weekly show on the public radio station WPFW about the intersection of higher education and social justice. When she’s not on the hunt for a good story, you can find her scoping out the local music scene and looking for good eats that don't involve whatever Provel "cheese" is.
Wednesday, October 20, 2021 - 7:00pm
St. Louis Public Radio
3651 Olive Street
Saint Louis, MO 63108

Seed Money: Monsanto's Past and Our Food Future (Hardcover)