Friday, September 23, 2022 - 7:00pm
Friday, September 23, 7pm CT
In person at The Ethical Society of St. Louis
9001 Clayton Road, St. Louis, MO 63117
Tickets available for Admit One or Admit Two in person attendance with each ticket to include one book.
**Vaccination and masks required for in-person attendance**
To attend virtually, please purchase a virtual ticket to include one book. 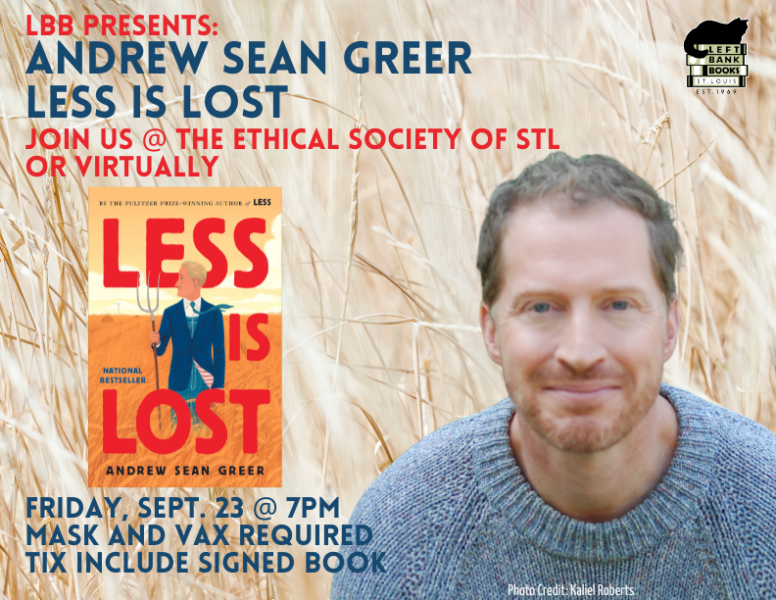 Left Bank Books welcomes Pulitzer Prize winning author
Andrew Sean Greer,
who will discuss the eagerly awaited follow-up to the Pulitzer Prize-winning Less,
Less is Lost,
in person at the Ethical Society of St. Louis
and virtually at 7pm CT on September 23rd.
Tickets are available at Left-Bank.com for the in person event or virtual event. Each ticket will include one SIGNED copy of
Less is Lost
from Left Bank Books to support authors and independent bookstores!
Andrew Sean Greer is the Pulitzer Prize winning author of six works of fiction, including the bestsellers The Confessions of Max Tivoli and Less. Greer has taught at a number of universities, including the Iowa Writers Workshop, been a TODAY show pick, a New York Public Library Cullman Center Fellow, a judge for the National Book Award, and a winner of the California Book Award and the New York Public Library Young Lions Award. He is the recipient of a NEA grant, a Guggenheim Fellowship, and the 2018 Pulitzer Prize for Fiction. He lives in San Francisco.
In the "wildly, painfully, funny" (David Sedaris) follow-up to the best-selling and Pulitzer Prize-winning Less: A Novel, the awkward and lovable Arthur Less returns in an unforgettable road trip across America.

"Go get lost somewhere, it always does you good."

For Arthur Less, life is going surprisingly well: he is a moderately accomplished novelist in a steady relationship with his partner, Freddy Pelu. But nothing lasts: the death of an old lover and a sudden financial crisis has Less running away from his problems yet again as he accepts a series of literary gigs that send him on a zigzagging adventure across the US.

Less roves across the "Mild Mild West," through the South and to his mid-Atlantic birthplace, with an ever-changing posse of writerly characters and his trusty duo - a human-like black pug, Dolly, and a rusty camper van nicknamed Rosina. He grows a handlebar mustache, ditches his signature gray suit, and disguises himself in the bolero-and-cowboy-hat costume of a true "Unitedstatesian"... with varying levels of success, as he continues to be mistaken for either a Dutchman, the wrong writer, or, worst of all, a "bad gay."

We cannot, however, escape ourselves--even across deserts, bayous, and coastlines. From his estranged father and strained relationship with Freddy, to the reckoning he experiences in confronting his privilege, Arthur Less must eventually face his personal demons. With all of the irrepressible wit and musicality that made Less a bestselling, Pulitzer Prize-winning, must-read breakout book, Less Is Lost is a profound and joyous novel about the enigma of life in America, the riddle of love, and the stories we tell along the way.

"It is a deep pleasure to return to the adventures of Arthur Less and his beloved Freddy. Greer is a brilliant storyteller as always, and the joyfulness of this book is a balm. I loved reading it."-- Madeline Miller, bestselling author of CIRCE
"What a joy to be reunited with the beloved, hapless, utterly delightful Arthur Less. With tenderness, wit and his incomparably lovely prose, Greer probes that most profound and mysterious of subjects: love."-- Katie Kitamura, author of Intimacies
"Excited to be reunited with our neurotic hero Arthur Less, I ripped through this sequel. It was a thrill to go on this odyssey with Less where even the most picayune comic encounters turn profound. Vulnerable and witty, Less is Lost is a joy."-- Cathy Park Hong, bestselling author of Minor Feelings
"Only Arthur Less could be both frustratingly stuck, yet on the move. Let loose, yet totally lost. Full of wit, but without a clue. And while he runs from himself, finds himself at the same time. Put all of that on a wild road trip through a wilder America, and you end up with something hilarious, affecting, and unforgettable."-- Marlon James, winner of the 2015 Booker Prize
"There is no better guide across America than Arthur Less, the 'bad gay' whose engaging awkwardness and self-deprecation are tragically funny and hugely insightful. We should all be so lost."-- Bonnie Garmus, author of Lessons in Chemistry
"Less is the funniest, smartest and most humane novel I've read since Tom Rachman's 2010 debut, The Imperfectionists. . . . Greer writes sentences of arresting lyricism and beauty. His metaphors come at you like fireflies. . . . Andrew Sean Greer's Less is excellent company. It's no less than bedazzling, bewitching and be-wonderful."-- Christopher Buckley, New York Times Book Review
"Greer is an exceptionally lovely writer, capable of mingling humor with sharp poignancy.... Brilliantly funny.... Greer's narration, so elegantly laced with wit, cradles the story of a man who loses everything: his lover, his suitcase, his beard, his dignity." -- Ron Charles, Washington Post
"Greer's novel is philosophical, poignant, funny and wise, filled with unexpected turns....Although Greer is gifted and subtle in comic moments, he's just as adept at ruminating on the deeper stuff. His protagonist grapples with aging, loneliness, creativity, grief, self-pity and more."-- San Francisco Chronicle
"I recommend it with my whole heart." -- Ann Patchett
"Marvelously, unexpectedly, endearingly funny. A love story focused on the erroneous belief that the second half of life will pale in comparison to the first. Guess what? It won't!"-- Gary Shteyngart, author of Lake Success
Event address:
Ethical Society of St. Louis
9001 Clayton Road
Saint Louis, MO 63117
Books:

Less (Winner of the Pulitzer Prize): A Novel (The Arthur Less Books #1) (Paperback)

The Impossible Lives of Greta Wells: A Novel (Paperback)

The Story of a Marriage: A Novel (Paperback)

The Confessions of Max Tivoli: A Novel (Paperback)