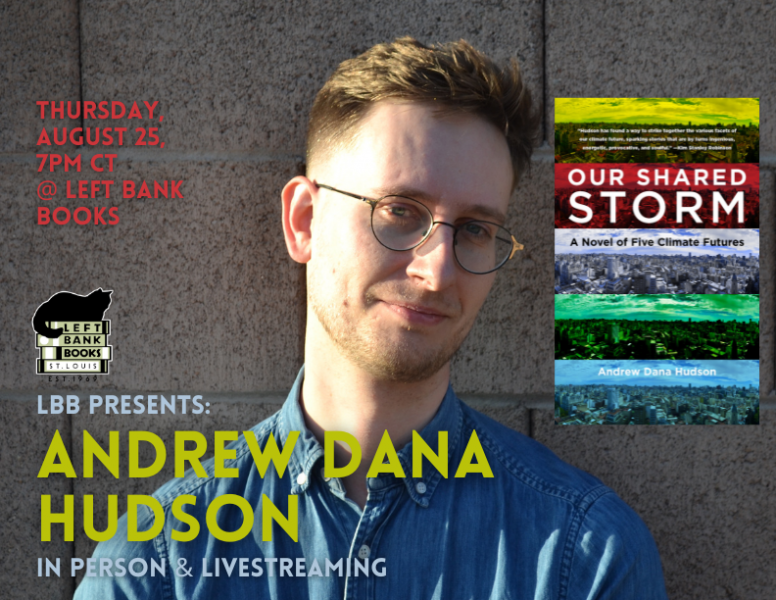 Left Bank Books welcomes St. Louis native, speculative-fiction writer, sustainability researcher, and narrative strategist,
Andrew Dana Hudson,
who will discuss his book
Our Shared Storm: A Novel of Five Climate Futures
in our store on August 25th at 7pm!
We are so happy to resume in person programming in the store and thrilled to welcome Andrew Dana Hudson back to St. Louis!
Join us in person or our YouTube & Facebook Live Page.
Order a copy of
Our Shared Storm: A Novel of Five Climate Futures
from Left Bank Books to support authors and independent bookstores!
Andrew will personalize and sign copies for sale from Left Bank Books.
If you are unable to make it in person, leave a personalization note in your online order.
Andrew Dana Hudson is a speculative-fiction writer, sustainability researcher, and narrative strategist. His stories have appeared in Slate Future Tense, Lightspeed Magazine, Vice Terraform, MIT Technology Review, Grist, and more, as well as in various books and anthologies. His nonfiction writing has appeared in Slate, among others.

What is the future of our climate? Given that our summers now regularly feature Arctic heat waves and wildfire blood skies, polar vortex winters that reach all the way down to Texas, and "100-year" storms that hit every few months, it may seem that catastrophe is a done deal. As grim as things are, however, we still have options. Combining fiction and nonfiction and employing speculative tools for scholarly purposes, Our Shared Storm explores not just one potential climate future but five possible outcomes dependent upon our actions today.

Written by speculative-fiction writer and sustainability researcher Andrew Dana Hudson, Our Shared Storm features five overlapping fictions to employ a futurist technique called "scenarios thinking." Rather than try to predict how history will unfold--picking one out of many unpredictable and contingent branching paths--it instead creates a set of futures that represent major trends or counterposed possibilities, based on a set of climate-modeling scenarios known as the Shared Socioeconomic Pathways (SSPs).

The setting is the year 2054, during the Conference of the Parties global climate negotiations (a.k.a., The COP) in Buenos Aires, Argentina. Each story features a common cast of characters, but with events unfolding differently for them--and human society--in each alternate universe. These five scenarios highlight the political, economic, and cultural possibilities of futures where investments in climate adaptation and mitigation promised today have been successfully completed, kicked down the road, or abandoned altogether. From harrowing to hopeful, these stories highlight the choices we must make to stabilize the planet.

Our Shared Storm is an experiment in deploying practice-based research methods to explore the opportunities and challenges of using climate fiction to engage scientific and academic frameworks.

Hudson has found a way to strike together all the various facets of our rapidly changing climate future, sparking stories that are by turns, and often all at once, ingenious, energetic, provocative, and soulful. He is the face of this new movement in science fiction, and we're lucky to have him. ---Kim Stanley Robinson

Hudson's innovative and exciting publication is, simultaneously, a consideration of the relationship between climate fiction and climate policy, a highly readable and teachable set of climate stories, and a critical intervention in what climate fiction is capable of achieving in the 'real' world. ---Adeline Johns-Putra, Professor of Literature, Xi'an Jiaotong-Liverpool University, China

Andrew Dana Hudson's Our Shared Storm is a fascinating thought-experiment in imagining worlds to come. Through a set of common characters kaleidoscopically revealed, readers are granted perspectival narrative access to a skein of political, cultural, and philosophical views that, along with their attendant actions, will shape the planet for worse--or, perhaps, better. ---Christopher Schaberg, author of Searching for the Anthropocene

Our Shared Storm: A Novel of Five Climate Futures (Paperback)