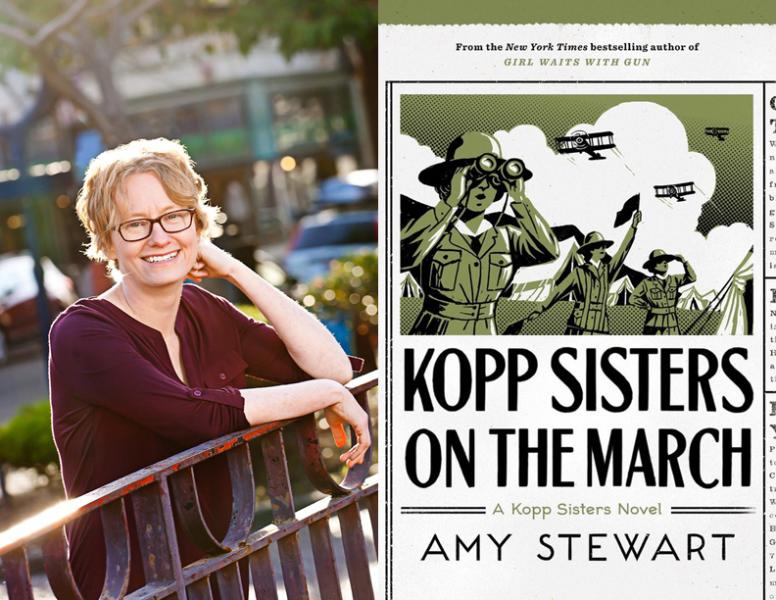 Left Bank Books welcomes New York Times best-selling author of the acclaimed Kopp Sisters series, Amy Stewart, who will sign and discuss her most recenet addition to the series, Kopp Sisters on the March.

In the fifth installment of Amy Stewart’s clever and original Kopp Sisters series, the sisters learn some military discipline—whether they’re ready or not—as the U.S. prepares to enter World War I. It’s the spring of 1917 and change is in the air. American women have done something remarkable: they’ve banded together to create military-style training camps for women who want to serve. These so-called National Service Schools prove irresistible to the Kopp sisters, who leave their farm in New Jersey to join up. When an accident befalls the matron, Constance reluctantly agrees to oversee the camp—much to the alarm of the Kopps’ tent-mate, the real-life Beulah Binford, who is seeking refuge from her own scandalous past under the cover of a false identity. Will she be denied a second chance? And after notoriety, can a woman’s life ever be her own again?

In Kopp Sisters on the March, the women of Camp Chevy Chase face down the skepticism of the War Department, the double standards of a scornful public, and the very real perils of war. Once again, Amy Stewart has brilliantly brought a little-known moment in history to light with her fearless and funny Kopp sisters novels

Amy Stewart is the New York Times best-selling author of the acclaimed Kopp Sisters series, which began with Girl Waits with Gun. Her six nonfiction books include The Drunken Botanist and Wicked Plants. She and her husband own a bookstore called Eureka Books. She lives in Portland, Oregon. For book club resources, Skype chats, and more, visit www.amystewart.com/bookclubs.

Featuring a special cocktail by Amy Stewart herself!