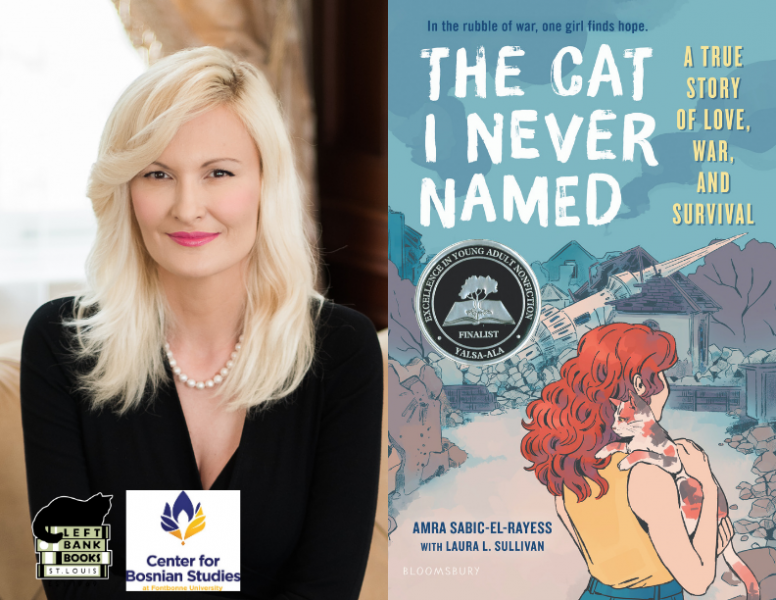 Left Bank Books and the Center for Bosnian Studies at Fontbonne University welcome Bosnian author and educator
Amra Sabic-El-Rayess,
who will discuss her new memoir for young adults,
The Cat I Never Named: A True Story of Love, War, and Survival,
on our Facebook Live Page at 7pm CT on March 22.
Sabic-El-Rayess will be in conversation with interpreter, researcher, and adviser with the Center for Bosnian Studies
Elma Salesevic.
Join us on our Facebook Live Page and order a copy of
The Cat I Never Named
from Left Bank Books to support authors and independent bookstores!

About The Cat I Never Named

The stunning memoir of a Muslim teen struggling to survive in the midst of the Bosnian genocide--and the stray cat who protected her family through it all.

In 1992, Amra was a teen in Bihac, Bosnia, when her best friend said they couldn't speak anymore. Her friend didn't say why, but Amra knew the reason: Amra was Muslim. It was the first sign her world was changing. Then Muslim refugees from other Bosnian cities started arriving, fleeing Serbian persecution. When the tanks rolled into Bihac, bringing her own city under seige, Amra's happy life in her peaceful city vanished.

But there is light even in the darkest of times, and she discovered that light in the warm, bonfire eyes of a stray cat. The little calico had followed the refugees into the city and lost her own family. At first, Amra doesn't want to bother with a stray; her family doesn't have the money to keep a pet. But with gentle charm this kitty finds her way into everyone's heart, and after a few near miracles when she seems to save the family, how could they turn her away?

Here is the stunning true story of a teen who, even in the brutality of war, never wavered in her determination to obtain an education, maintain friendships, and even find a first love-and the cat who gave comfort, hope, and maybe even served as the family's guardian spirit.

“Gripping. . . . Sabic-El-Rayess's visual imagination is a slipstream. Amra's words have a subtle, relentless force, creating a world where life is a danger, a demand, and a warm, calico presence.” —Foreword Reviews (starred review)

Amra Sabic-El-Rayess grew up in Bihac, Bosnia and Herzegovina. After surviving ethnic cleansing and more than 1100 days under the Serbs' military siege, she emigrated to the United States in 1996. By December 1999, she earned a BA in Economics from Brown University. Later, she obtained two Masters degrees and a Doctorate from Columbia University. Currently, she is a professor at Columbia University working on understanding how and why societies fall apart and what role education can play in rebuilding decimated countries. She has published extensively on education-related issues, and has lectured around the world to adult and adolescent audiences. In her students' feedback, Amra is consistently praised as one of the most inspiring professors they have encountered. She divides her time between Manhattan and Tuxedo Park with her husband and two daughters, ages 11 and 13.

Born in Serbia in 1979, Elma Salesevic moved to Sarajevo, the capital of Bosnia, when she was 6 months old.  When the war started in 1992, she escaped with her mother on the last military cargo plane out. After living for 25 months in Serbia and Montenegro, she returned to Sarajevo–which was still under siege--in September 1994, crawling through a makeshift tunnel that had been dug under the airport’s runway. Living with no electricity and little food, she survived the remainder of the war by reading—first all of her family’s books and then those of her neighbors. After the war, she graduated from the University of Sarajevo with a degree in Civil Engineering and Telecommunications. After immigrating to the U.S. in 2008, she worked for ten years as a community interpreter; she now works for U.S. Bank.  Ms. Salesevic has been active in the Bosnia Memory Project since 2012 as an interpreter, researcher, and adviser.

The Cat I Never Named: A True Story of Love, War, and Survival (Hardcover)