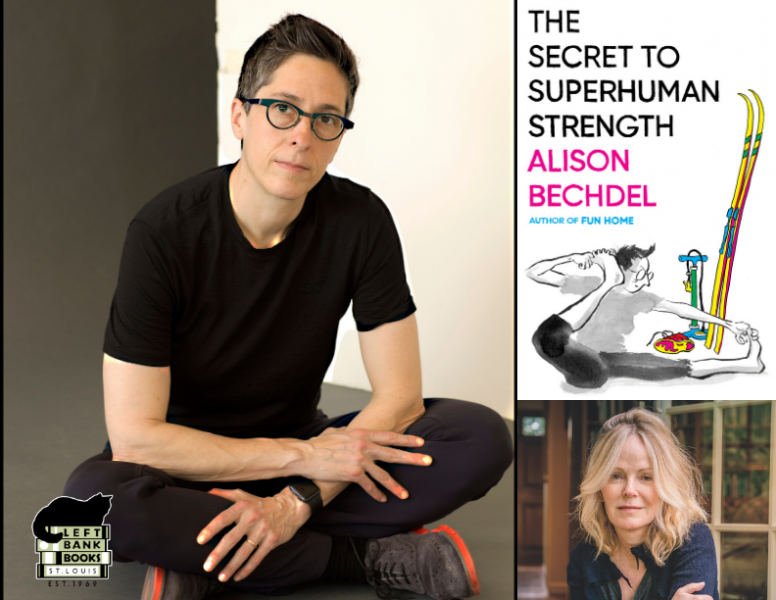 Left Bank Books welcomes award-winning cartoonist and author
Alison Bechdel,
who will discuss her new memoir,
The Secret to Superhuman Strength,
on May 12 at 7pm CT in a private online event.
Bechdel will be in conversation with bestselling novelist
Dani Shapiro.
This is an exclusive event that requires purchase of a copy of
The Secret to Superhuman Strength
from Left Bank Books for admission.

About The Secret to Superhuman Strength

From the author of Fun Home, a profoundly affecting graphic memoir of Bechdel's lifelong love affair with exercise, set against a hilarious chronicle of fitness fads in our times

Comics and cultural superstar Alison Bechdel delivers a deeply layered story of her fascination, from childhood to adulthood, with every fitness craze to come down the pike: from Jack LaLanne in the 60s ("Outlandish jumpsuit! Cantaloupe-sized guns!") to the existential oddness of present-day spin class. Readers will see their athletic or semi-active pasts flash before their eyes through an ever-evolving panoply of running shoes, bicycles, skis, and sundry other gear. But the more Bechdel tries to improve herself, the more her self appears to be the thing in her way. She turns for enlightenment to Eastern philosophers and literary figures, including Beat writer Jack Kerouac, whose search for self-transcendence in the great outdoors appears in moving conversation with the author’s own. This gifted artist and not-getting-any-younger exerciser comes to a soulful conclusion. The secret to superhuman strength lies not in six-pack abs, but in something much less clearly defined: facing her own non-transcendent but all-important interdependence with others.

A heartrendingly comic chronicle for our times.

Alison Bechdel’s cult following for her early comic strip Dykes to Watch Out For expanded wildly for her family memoirs, the best-selling graphic memoir Fun Home, adapted into a Tony Award-winning musical, and Are You My Mother?  Bechdel has been named a MacArthur Fellow and Cartoonist Laureate of Vermont, among many other honors. Her new memoir, The Secret to Superman Strength, is forthcoming in 2021.

Dani Shapiro is the author of the New York Times bestselling memoir Inheritance, as well as Hourglass, Still Writing, Devotion, and Slow Motion and five novels including Black & White and Family History. Also an essayist and a journalist, Shapiro's short fiction, essays, and journalistic pieces have appeared in The New Yorker, Granta, Tin House, One Story, Elle, Vogue, O, The Oprah Magazine, The New York Times Book Review, the op-ed pages of the New York Times, and many other publications. She has taught in the writing programs at Columbia, NYU, the New School, and Wesleyan University; she is cofounder of the Sirenland Writers Conference in Positano, Italy. Shapiro is the host of the hit podcast, Family Secrets. She lives with her family in Litchfield County, Connecticut.

You may purchase a copy of The Secret to Superhuman Strength from Left Bank Books online or by phone. You must provide an email address to be invited to the private online event. If you have purchased the book from Left Bank, you will receive an email event reminder a few days prior to the event. You will receive the actual email invite to join the private online event on the DAY OF the event.

The Secret to Superhuman Strength (Hardcover)

Inheritance: A Memoir of Genealogy, Paternity, and Love (Paperback)