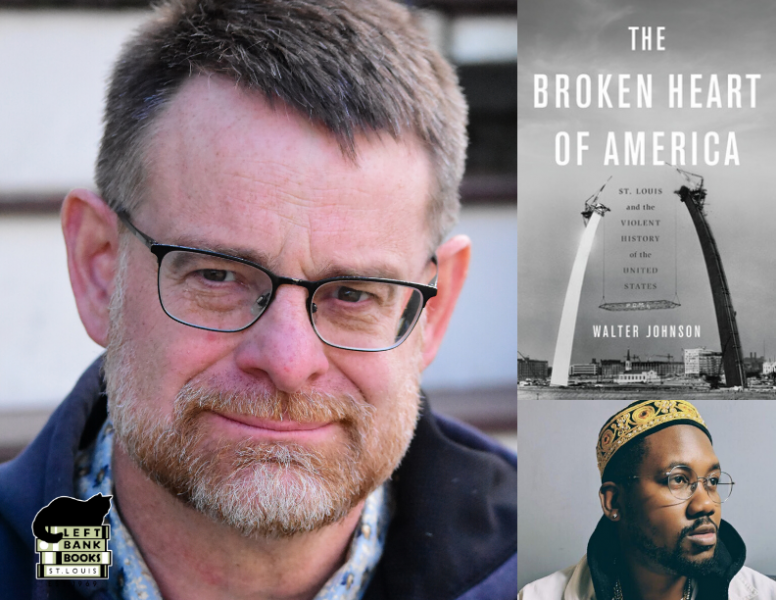 Left Bank Books welcomes award winning Missouri native author, Walter Johnson, discussing his new book on the racial dynamics entwined with American and St. Louis history, The Broken Heart of America, on Facebook Live at 7pm CDT on August 13. Johnson will be in conversation with rapper, author, and social revolutionary Tef Poe. Join us on our Facebook Page and order a copy of The Broken Heart of America from Left Bank Books to support authors and independent bookstores!

A searing portrait of the racial dynamics that lie inescapably at the heart of our nation, told through the turbulent history of the city of St. Louis. From Lewis and Clark’s 1804 expedition to the 2014 uprising in Ferguson, American history has been made in St. Louis. And as Walter Johnson shows in this searing book, the city exemplifies how imperialism, racism, and capitalism have persistently entwined to corrupt the nation’s past. St. Louis was a staging post for Indian removal and imperial expansion, and its wealth grew on the backs of its poor black residents, from slavery through redlining and urban renewal. But it was once also America’s most radical city, home to anti-capitalist immigrants, the Civil War’s first general emancipation, and the nation’s first general strike—a legacy of resistance that endures. A blistering history of a city’s rise and decline, The Broken Heart of America will forever change how we think about the United States.

"The thread that runs through this entire book is the historical relationship between US imperialism, Indian removal, and anti-Black racism. Although also a granular history of the city of St. Louis, The Broken Heart of America is a deep history of the United States' continental empire with St. Louis at the center of economic and military operations. This may be the most important book on US history you will read in your lifetime." -- Roxanne Dunbar-Ortiz, author of An Indigenous Peoples' History of the United States

"When it comes to the history of racism and exclusion in the United States, St. Louis wasn't unique...what it was, Johnson says, was more extreme.... Johnson is a spirited and skillful rhetorician, juggling a slew of historical facts while never allowing the flame of his anger to dim.... As he ably shows, so much exploitation lies in the details." —New York Times

Walter Johnson is Winthrop Professor of History and professor of African and African American Studies at Harvard University, and author of the critically acclaimed River of Dark Dreams and Soul by Soul, which won the Frederick Jackson Turner Award, the Avery O. Craven Award, and several other prestigious prizes. A Missouri native, he lives in Arlington, Massachusetts.

Tef Poe is an American-born rapper, author, educator, award-winning journalist, and social revolutionary from St. Louis, MO. Tef Poe is one of the co-founders of the Hands Up United movement, founded in Ferguson after the killing of Michael Brown Jr. In 2017-2018, Tef Poe was selected to be the Nasir Jones Hip Hop Fellow via Harvard University’s prestigious W.E.B. Du Bois Research Institute. He is currently an Independent Scholar at Harvard University’s Charles Warren Center for American Studies. As a hip hop artist, Tef Poe has performed on stages with the likes of Mos Def and Talib Kweli, Lupe Fiasco, Rick Ross, Bia, Dead Prez, TI, Macklemore, Harry Belafonte, Stevie Wonder, and more.