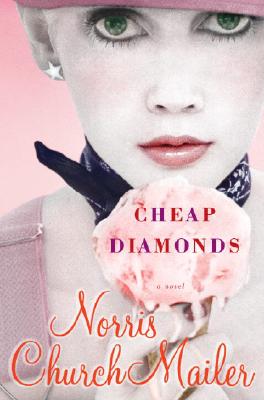 Norris Church Mailer triumphantly returns to the page with this breezy, hilarious novel of discovery and destiny. Set against the backdrop of 1970s New York City, Cheap Diamonds follows a sweet young girl from the South who risks it all to fulfill her heart’s desire.

Cherry Marshall seeks a life beyond the confines of her Arkansas world. “Sweet Valley was not the place for a girl with stars in her eyes, and I had stars big enough to blind me.” Leaving behind all the comforts–and problems–of home, she sets out to enter the New York modeling world at the advanced age of twenty-two. At “five-twelve,” with unusually white eyebrows, the platinum-blond beauty may be a little too unique to fit in with the latest crop of all-American girls dominating the magazines of the era. Yet aided by her Southern smarts, her drive, and a touch of country naïveté, Cherry finds herself in the right place at the right time–and with all the right people.

There’s makeup artist Salvador, who moonlights as “Miss Sally”; Suzan Hartman, a model turned agency head and fellow Arkansan; Mrs. Digby, Cherry’s eccentric landlady, a former Ziegfeld girl; Aurelius, a saxophonist and neighbor who piques Cherry’s romantic interests; and Lale, a hunk from back home who skipped out on his fiancée, Cherry’s friend Cassie, to become an underwear model.

It all unfolds like a dream–this new world where men have boyfriends, and paintings of soup cans pass for art. As Cherry’s star begins to rise, she finds herself at Max’s Kansas City among Andy Warhol’s glamorous crowd, dining at Elaine’s, and drawing the attention of high society. But their sophisticated, sometimes shallow ways are often at odds with Cherry’s homegrown values. The line between right and wrong blurs, and the ingenue will discover how far she’s willing to go to stay on top.

Mailer vividly captures a thrilling era when New York City was the burgeoning center of art and fashion, when being young and beautiful was the only currency one needed for survival. Smartly written, full of humor and hope, Cheap Diamonds reminds us that no matter where we travel in life, we are never very far from home.