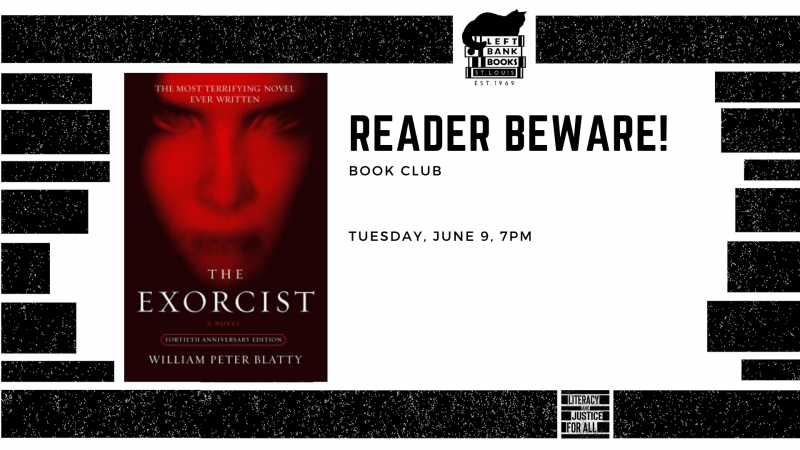 Join Reader Beware! for a reading group discussion of The Exorcist by William Peter Blatty!

This is not a fairy tale. This is about real witches.

Grandmamma loves to tell about witches. Real witches are the most dangerous of all living creatures on earth. There's nothing they hate so much as children, and they work all kinds of terrifying spells to get rid of them. Her grandson listens closely to Grandmamma's stories—but nothing can prepare him for the day he comes face-to-face with The Grand High Witch herself!

Get The Exorcist for 20% off in store and online during the months of May and June!

Join Reader Beware! for a reading group discussion of I Have No Mouth & I Must Scream by Harlan Ellison!

Hugo Award winner I Have No Mouth and I Must Scream is living legend Harlan Ellison's masterpiece of future warfare. In a post-apocalyptic world, four men and one woman are all that remain of the human race, brought to near extinction by an artificial intelligence. Programmed to wage war on behalf of its creators, the AI became self-aware and turned against all humanity. The five survivors are prisoners, kept alive and subjected to brutal torture by the hateful and sadistic machine in an endless cycle of violence.

Presented here with six more groundbreaking and inventive tales that probe the depths of mortal experience, this collection proves why Ellison has earned the many accolades he's received and remains one of the most original voices in American literature.

I Have No Mouth and I Must Scream also includes "Big Sam Was My Friend," "Eyes of Dust," "World of the Myth," "Lonelyache," Hugo Award finalist "Delusion for a Dragon Slayer," and Hugo and Nebula Award finalist "Pretty Maggie Moneyeyes."

Get I Have No Mouth & I Must Scream for 20% off in store and online during the months of March and April!

Join Novel Ideas for a reading group discussion of An American Marriage by Tayari Jones!

Newlyweds Celestial and Roy are the embodiment of both the American Dream and the New South. He is a young executive, and she is an artist on the brink of an exciting career. But as they settle into the routine of their life together, they are ripped apart by circumstances neither could have imagined. Roy is arrested and sentenced to twelve years for a crime Celestial knows he didn’t commit. Though fiercely independent, Celestial finds herself bereft and unmoored, taking comfort in Andre, her childhood friend, and best man at their wedding. As Roy’s time in prison passes, she is unable to hold on to the love that has been her center. After five years, Roy’s conviction is suddenly overturned, and he returns to Atlanta ready to resume their life together.

This stirring love story is a profoundly insightful look into the hearts and minds of three people who are at once bound and separated by forces beyond their control. An American Marriage is a masterpiece of storytelling, an intimate look deep into the souls of people who must reckon with the past while moving forward—with hope and pain—into the future.

Get An American Marriage for 20% off in store and online during the months of March and April!

Join the Lesbian Reading Group for a discussion of Juliet Takes a Breath  by Gabby Rivera!

Juliet Milagros Palante is a self-proclaimed closeted Puerto Rican baby dyke from the Bronx. Only, she's not so closeted anymore. Not after coming out to her family the night before flying to Portland, Oregon, to intern with her favorite feminist writer--what's sure to be a life-changing experience. And when Juliet's coming out crashes and burns, she's not sure her mom will ever speak to her again.

But Juliet has a plan--sort of. Her internship with legendary author Harlowe Brisbane, the ultimate authority on feminism, women's bodies, and other gay-sounding stuff, is sure to help her figure out this whole "Puerto Rican lesbian" thing. Except Harlowe's white. And not from the Bronx. And she definitely doesn't have all the answers . . .

In a summer bursting with queer brown dance parties, a sexy fling with a motorcycling librarian, and intense explorations of race and identity, Juliet learns what it means to come out--to the world, to her family, to herself.

Get Juliet Takes a Breath for 20% off in store and online during the months of April and May!

Join the Lesbian Reading Group for a discussion of She Called Me Woman: Nigeria's Queer Women Speak!

Bess Campbell has escaped to the windswept Australian coastal town of Port Bannir, determined to begin her life again. She is loving her fresh start, thanks to her fun job running a hip gallery, her territorial chickens, and a lot of self-help books to find her new, better self.

Port Bannir local Margaret Gale runs an austere maritime museum, and rules her staff with an iron fist. She has no time for that crazy modern gallery or upbeat, earnest Bess sweeping around town on her hipster bicycle.

But when Port Bannir is rocked by a senseless murder, both women find themselves implicated. Can they work together to expose the truth--or will the truth prove far too dangerous?

Get She Called Me Woman: Nigeria's Queer Women Speak for 20% off in store and online during the months of March and April!

oin the Gay Men's Reading Group for a discussion of Confessions Of A Mask by Yukio Mishima!

The story of a man coming to terms with his homosexuality in traditional Japanese society has become a modern classic.

Confessions of a Mask tells the story of Kochan, an adolescent boy tormented by his burgeoning attraction to men: he wants to be “normal.”  Kochan is meek-bodied, and unable to participate in the more athletic activities of his classmates. He begins to notice his growing attraction to some of the boys in his class, particularly the pubescent body of his friend Omi. To hide his homosexuality, he courts a woman, Sonoko, but this exacerbates his feelings for men. As news of the War reaches Tokyo, Kochan considers the fate of Japan and his place within its deeply rooted propriety.

Confessions of a Mask reflects Mishima’s own coming of age in post-war Japan. Its publication in English—praised by Gore Vidal, James Baldwin, and Christopher Isherwood— propelled the young Yukio Mishima to international fame.

Get Confessions Of A Mask for 20% off in store and online during the months of April and May!

oin the Gay Men's Reading Group for a discussion of Tin Man by Sarah Winman!

This is almost a love story. But it's not as simple as that.

Ellis and Michael are twelve-year-old boys when they first become friends, and for a long time it is just the two of them, cycling the streets of Oxford, teaching themselves how to swim, discovering poetry, and dodging the fists of overbearing fathers. And then one day this closest of friendships grows into something more.

But then we fast-forward a decade or so, to find that Ellis is married to Annie, and Michael is nowhere in sight. Which leads to the question: What happened in the years between?

With beautiful prose and characters that are so real they jump off the page, Tin Man is a love letter to human kindness and friendship, and to loss and living.

Get Tin Man for 20% off in store and online during the months of March and April!

Join  Great Novels of the 22nd Century for a reading group discussion of Beggars in Spain by Nancy Kress!

In a world where the slightest edge can mean the difference between success and failure, Leisha Camden is beautiful, extraordinarily intelligent ... and one of an ever-growing number of human beings who have been genetically modified to never require sleep.

Once considered interesting anomalies, now Leisha and the other "Sleepless" are outcasts -- victims of blind hatred, political repression, and shocking mob violence meant to drive them from human society ... and, ultimately, from Earth itself.

But Leisha Camden has chosen to remain behind in a world that envies and fears her "gift" -- a world marked for destruction in a devastating conspiracy of freedom ... and revenge.

Nancy Kress is the author of fourteen books of fantasy and science fiction, including both novels and short-story collections.

Get Beggars in Spain for 20% off in store and online during the month of March!

THIS BOOK GROUP MEETING IS BEING MOVED ONLINE TO ZOOM.

Join Novel Ideas for a reading group discussion of The Dutch House by Ann Patchett!

At the end of the Second World War, Cyril Conroy combines luck and a single canny investment to begin an enormous real estate empire, propelling his family from poverty to enormous wealth. His first order of business is to buy the Dutch House, a lavish estate in the suburbs outside of Philadelphia. Meant as a surprise for his wife, the house sets in motion the undoing of everyone he loves.

The story is told by Cyril’s son Danny, as he and his older sister, the brilliantly acerbic and self-assured Maeve, are exiled from the house where they grew up by their stepmother. The two wealthy siblings are thrown back into the poverty their parents had escaped from and find that all they have to count on is one another. It is this unshakeable bond between them that both saves their lives and thwarts their futures.

Set over the course of five decades, The Dutch House is a dark fairy tale about two smart people who cannot overcome their past. Despite every outward sign of success, Danny and Maeve are only truly comfortable when they’re together. Throughout their lives they return to the well-worn story of what they’ve lost with humor and rage. But when at last they’re forced to confront the people who left them behind, the relationship between an indulged brother and his ever-protective sister is finally tested.

Get The Dutch House for 20% off in store and online during the months of February and March!

Calhoun McBride and Clement Cartwright are men from different worlds. Young Calhoun works backbreaking, midnight shifts at the Snopes Brewery...and earns a little extra selling his body to eager men. Clement left St. Louis to pursue his architectural ambitions and returns to great fanfare as the man planning the city's first skyscraper. But one steamy night, by the Mississippi River, both men find themselves drawn to one another. But what chance has brought together, the machinations of a bitter and cruel man, Belasco Snopes, who thinks St. Louis belongs to him...down to its people, victims for all his appetites. Lambda Literary Award finalist Scott Alexander Hess's new historical novel offers readers a sultry story with menace.

Get River Runs Red for 20% off in store and online during the months of February and March!