Civil rights expert and Dartmouth history professor Matthew Delmont presents a definitive history of World War II from the African American perspective. Over one million Black men and women served in World War II–and yet the stories of these Black veterans have long been ignored, cast aside in favor of the myth of the “Good War” fought by the “Greatest Generation.” "Half American" is American history as you’ve likely never read it before. In these pages are stories of Black heroes whose bravery and patriotism in the face of unfathomable racism is both inspiring and galvanizing.

Thursday, October 20, 2022 - 7:00pm
Tuesday, November 15, 7pm CT
In person at .ZACK Performing Arts Space
3224 Locust St, St. Louis, MO 63103
Tickets available for Admit One in person attendance with each ticket to include one SIGNED book
**Vaccination and masks required for in-person attendance**
To attend virtually, please purchase a virtual ticket to include one SIGNED book.

Left Bank Books welcomes #1 New York Times bestselling author of What Kind of Woman,
Kate Baer
who will share from her second full length poetry collection
And Yet,
in person at .ZACK Performing Arts Space
and virtually at 7pm CT on Tuesday, November 15th.
Baer will be in conversation with TBA.
Tickets are available for the in person event at Metrotix.com for the in person event
or Left-Bank.com for the virtual event. Each ticket will include one SIGNED copy of
And Yet: Poems
from Left Bank Books to support authors and independent bookstores!

Kate Baer is the 2x New York Times bestselling author of What Kind Of Woman and I Hope This Finds You Well. Her work has also been published in The New Yorker, Literary Hub, Huffington Post and The New York Times.

The second full length poetry collection from the #1 New York Times bestselling author of What Kind of Woman.

Kate Baer shot into the literary stratosphere with the publication of her debut poetry collection, What Kind of Woman, which became an instant #1 New York Times bestseller.

Kate's second full-length book of traditional poetry, And Yet, dives deeper into the themes that are the hallmarks of her writing: motherhood, friendship, love, and loss. Taken together, these poems demonstrate the remarkable evolution of a writer and an artist working at the height of her craft, pushing herself and her poetry in a beautiful and impressive way.

Intimate, evocative, and bold, Kate's beguiling poetry firmly positions her in the company of Dorianne Laux, Mary Oliver, Maggie Nelson, and other great female poets of our time.

Baer is a different kind of Instagram poet, not only in that her poems convey a depth of emotion more cutting than the spare, self-help word-art characteristic of so many social media-propelled poet phenomena. But she also distinguishes herself by acknowledging the self-seriousness of the genre (particularly among those who are their own greatest promoters) and gently poking a hole in it. -- Vogue 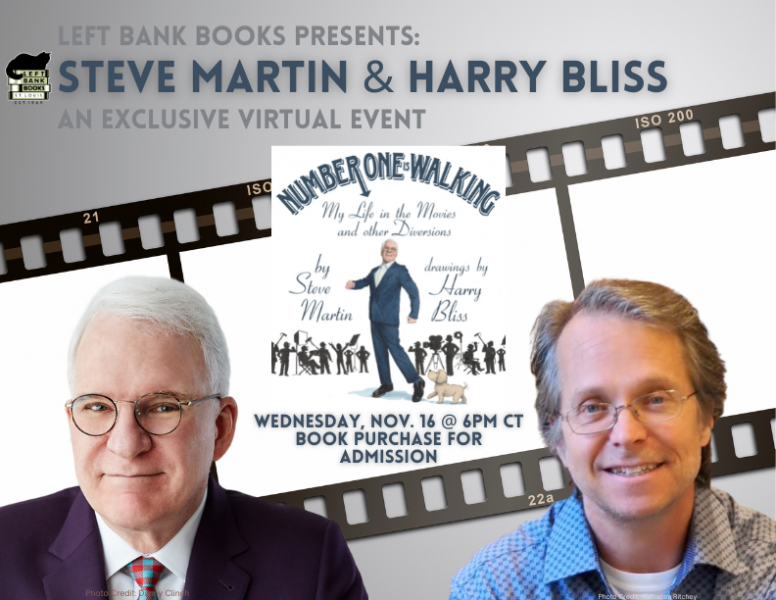 Join multi-talented comedian
Steve Martin
and heralded New Yorker cartoonist
Harry Bliss
to discuss their new illustrated book,
Number One Is Walking: My Life in the Movies and Other Diversions.
They will discuss Steve’s legendary career—his forty years in the movie biz,
as well as his stand-up comedy, banjo playing, writing, and cartooning.

Ticket bundles include a copy of Number One is Walking and an emailed link to attend the event from Left Bank Books. Please expect your link prior to the event and ensure your email address is correct when purchasing your book and ticket.

Please contact Left Bank Books in the event you do not receive your join link.

PRAISE FOR NUMBER ONE IS WALKING
"Irresistibly charming...Film buffs, comedy fans, and legion admirers of both the actor and artist will find themselves smiling from cover to cover." —Publishers Weekly, *starred review
"A diverting interlude with two exceptionally clever souls." —Kirkus Reviews
ABOUT NUMBER ONE IS WALKING:
Number One Is Walking is Steve Martin’s cinematic legacy—an illustrated memoir of his legendary acting career, with stories from his most popular films and artwork by New Yorker cartoonist Harry Bliss.
Steve Martin has never written about his career in the movies before. In Number One Is Walking, he shares anecdotes from the sets of his beloved films—Father of the Bride, Roxanne, The Jerk, Three Amigos, and many more—bringing readers directly into his world. He shares charming tales of antics, moments of inspiration, and exploits with the likes of Paul McCartney, Diane Keaton, Robin Williams, and Chevy Chase. Martin details his forty years in the movie biz, as well as his stand-up comedy, banjo playing, writing, and cartooning, all with his unparalleled wit.
With gorgeously illustrated cartoons and single-panel “diversions” in Steve and Harry’s signature style, Number One Is Walking is full of the everyday moments that make up a movie star’s life, capturing Steve Martin’s singular humor and acclaimed career in film. The perfect gift from the team who brought you the #1 New York Times bestseller A Wealth of Pigeons.
ABOUT STEVE MARTIN:
Steve Martin is one of the most well-known talents in entertainment. His work has earned him an Academy Award®, five Grammy® awards, an Emmy®, the Mark Twain Award, and the Kennedy Center Honors.
As an author, Martin’s work includes the novel An Object of Beauty, the play Picasso at the Lapin Agile, a collection of comic pieces, Pure Drivel, a bestselling novella, Shopgirl, and his memoir Born Standing Up. Martin’s films include The Jerk, Planes, Trains & Automobiles, Roxanne, Parenthood, L.A. Story, Father of the Bride, and Bowfinger.
ABOUT HARRY BLISS:
Harry Bliss is a cartoonist and cover artist for the New Yorker magazine. His syndicated single-panel comic ‘Bliss’ appears in newspapers internationally. He has written and illustrated over 20 books for children and is the founder of the Cornish CCS Fellowship for Graphic Novelists in Cornish, New Hampshire.
Wednesday, November 16, 2022 - 6:00pm