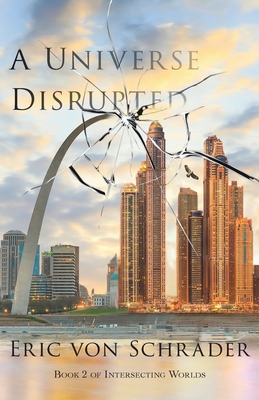 Billy Boustany had the adventure of a lifetime. Now, all he wants to do is to go back to the amazing universe he discovered. But the power brokers over there warned him to stay away and keep his mouth shut.

At the same time, Diyami Red Hawk, an idealistic young man from that universe has connected with Billy's daughter and is on a mission to build a modern Native American city in our world. But he's getting nowhere-until he finds support in unexpected places.

A plea for help from the other universe gives Billy his chance to return. He and his wife immerse themselves in the beauty and splendor of this odd, intriguing world. Then they encounter dark secrets lurking beneath its surface.

Billy, Diyami and their friends have to make the biggest decision of their lives, with the fate of two worlds hanging in the balance.

“In A Universe Less Traveled and A Universe Disrupted you’ll visit a St Louis you know (Parkway Central, Tower Grove Park, Webster University, Pho Grand (alas!), Cahokia) and one you have never imagined (no Arch, no Cardinals, a new Cahokia!). With Eric von Schrader, expect an unforgettable world of surprises and fun. I had an amazing time – and so will you.”

-Charlie Brennan, author of Only in St. Louis!, radio and television host