Villa and Zapata: A Biography of the Mexican Revolution (Paperback) 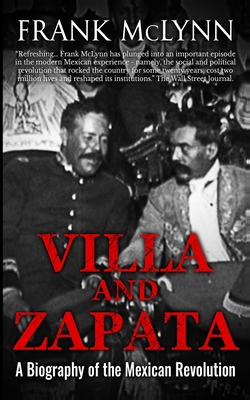 'Refreshing ... Frank McLynn has plunged into an important episode in the modern Mexican experience - namely, the social and political revolution that rocked the country for some twenty years, cost two million lives and reshaped its institutions.' The Wall Street Journal

The Mexican Revolution erupted in 1910 to the cry of "Tierra y Libertad" - Land and Liberty. In the ten years that followed, bloody clashes between impassioned rebels and unscrupulous autocrats convulsed a nation in search of a new identity.

It was the first massive social revolution of the twentieth century. Even as it visited further economic, cultural, and racial strife upon a country plagued by oppressive officials and crippled by poverty, it offered hope to the populace. And it made the rebel-outlaws Francisco (Pancho) Villa and Emiliano Zapata heroes in their time.

Villa and Zapata vividly chronicles the decade of turbulent and violent events. The ruthless Pancho Villa and his army of ex-cowboys in the north and Emiliano Zapata, recruiting his infantry from the sugar plantations in the south, successfully waged a devastating war on two fronts and brought down a string of autocrats in Mexico City.

Frank McLynn tells the story of the revolutionaries' chaotic fight for a cause that more towards agrarian reform than towards the amassing of political power. The struggle expertly reveals the inescapable influence of the United States, intertwined with the use of the railway network to transport men and weapons.

This rousing history recounts, too, the downfall of these two revolutionary heroes. Despite their triumph and only meeting, in 1914, in the Mexican capital, they failed to make common cause and fell victim to intrigues more treacherous than their own.

Frank McLynn is a British author, biographer, historian and journalist. He is noted for critically acclaimed biographies of Napoleon Bonaparte, Robert Louis Stevenson, Carl Jung, Richard Francis Burton and Henry Morton Stanley. He is also the author of Fitzroy Maclean and Bipolar, a novel about Roald Amundsen, published by Sharpe Books.

'Frank McLynn's achievement ... is to give Charles Edward a solidarity and three-dimensional reality that he usually lacks ... His account of the risings themselves is exemplary and he offers the best case yet for the nearness to success of the '45. What is usually seen as the last shiver of an anachronistic and romantic throwback emerges as a genuine alternative to Whiggery and the Act of Settlement.' Brian Morton, TES

'A broad canvas, dealing not only with sober historical truth but with the magic spell that either seduced or repelled Fielding, Sterne, Smollett, Burns, Scott, Borrow, Buchan, Stevenson and a hundred Irish poets...' Diarmaid O'Muirithe, Irish Independent

'Valuable in covering the wide sweep of Scotland, England, Ireland and the Continent, and bringing together many diverse strands into a coherent whole. Its wide range and taut approach make it very useful.' Rennie McOwan, The Tablet

'Packed with fascinating detail.' Denis Hills, choosing his book of the year in the Spectator