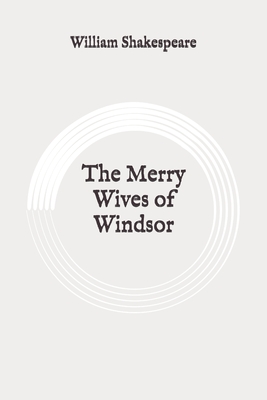 Shakespeare's only thoroughly English comedy, created an archetypal literary figure in the shape of the devious, irrepressible John Falstaff. This edition celebrates the play as a joyous exploration of language, but also places elements of its plot firmly in a continental, specifically Italian, tradition of romantic comedy.Falstaff decides to fix his financial woe by seducing the wives of two wealthy merchants. The wives find he sent them identical letters and take revenge by playing tricks on Falstaff when he comes calling. With the help of their husbands and friends, the wives play one last trick in the woods to put Falstaff's mischief to an end.SCENE IWindsor. Before PAGE's house. Enter SHALLOW, SLENDER, and SIR HUGH EVANS]SHALLOWSir Hugh, persuade me not; I will make a Star- chamber matter of it: if he were twenty Sir John Falstaffs, he shall not abuse Robert Shallow, esquire.SLENDERIn the county of Gloucester, justice of peace and 'Coram.'SHALLOWAy, cousin Slender, and 'Custalourum.SLENDERAy, and 'Rato-lorum' too; and a gentleman born, master parson; who writes himself 'Armigero, ' in any bill, warrant, quittance, or obligation, 'Armigero.'SHALLOWAy, that I do; and have done any time these three hundred years.SLENDERAll his successors gone before him hath done't; and all his ancestors that come after him may: they may give the dozen white luces in their coat.SHALLOWIt is an old coat.SIR HUGH EVANSThe dozen white louses do become an old coat well; it agrees well, passant; it is a familiar beast to man, and signifies love.SHALLOWThe luce is the fresh fish; the salt fish is an old coat.SLENDERI may quarter, coz.SHALLOWYou may, by marrying.SIR HUGH EVANSIt is marring indeed, if he quarter it.SHALLOWNot a whit.SIR HUGH EVANSYes, py'r lady; if he has a quarter of your coat, there is but three skirts for yourself, in my simple conjectures: but that is all one. If Sir John Falstaff have committed disparagements unto you, I am of the church, and will be glad to do my benevolence to make atonements and compremises between you.SHALLOWThe council shall bear it; it is a riot.SIR HUGH EVANSIt is not meet the council hear a riot; there is no fear of Got in a riot: the council, look you, shall desire to hear the fear of Got, and not to hear a riot; take your vizaments in that.SHALLOWHa o' my life, if I were young again, the sword should end it.SIR HUGH EVANSIt is petter that friends is the sword, and end it: and there is also another device in my prain, which peradventure prings goot discretions with it: there is Anne Page, which is daughter to Master Thomas Page, which is pretty virginity.