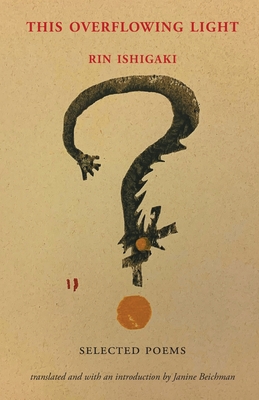 Born in central Tokyo in 1920, Ishigaki Rin was one of the most daring and gifted poets of Japan's postwar cultural renaissance. She knew Japan before the war, during it, and afterwards, saw it move from hubris to disastrous defeat - which included the destruction of her family home during one of the worst firebombings of Tokyo in 1945 - to restoration into the community of nations. Her poetry is witness to this history as seen from her own specific viewpoint, that of a single woman working in a bank as the only support for her six-member family, at first engaged in labor union activities, but later moving to a politically more independent position. Her sharpness of vision and down-to-earth understanding of everyday urban life, and of the politics of family and the workplace, helped to create her reputation as a writer of 'life poetry' and as a poet of resistance, but this combines with a matter-of-fact, unsentimental, and often humorous intimacy with the ordinary creatures and things of the world, whether animal, vegetable or mineral, to shed an almost other-worldly light over some of the poems, even though they speak in tones and about subjects refreshingly earthy and earthly.

Janine Beichman's skilled and deeply sympathetic translations capture Ishigaki's breadth and depths in English, from the early postwar political poems and cries for freedom from family ties all the way to the late poems in which she contemplates her own death. 'How else, ' she asked, 'could you write poetry except from your own life?'