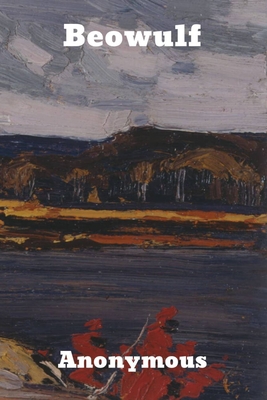 By Anonymous
$11.49
Not on our shelves at the moment, but we will order it for you.

The story is set in Scandinavia. Beowulf, a hero of the Geats, comes to the aid of Hrothgar, the king of the Danes, whose mead hall in Heorot has been under attack by a monster known as Grendel. After Beowulf slays him, Grendel's mother attacks the hall and is then also defeated. Victorious, Beowulf goes home to Geatland (G taland in modern Sweden) and becomes king of the Geats. Fifty years later, Beowulf defeats a dragon, but is mortally wounded in the battle. After his death, his attendants cremate his body and erect a tower on a headland in his memory.

The full story survives in the manuscript known as the Nowell Codex. It has no title in the original manuscript, but has become known by the name of the story's protagonist. In 1731, the manuscript was badly damaged by a fire that swept through Ashburnham House in London that had a collection of medieval manuscripts assembled by Sir Robert Bruce Cotton. The Nowell Codex is housed in the British Library.

The events in the poem take place over most of the sixth century, after the Anglo-Saxons had started migrating to England and before the beginning of the seventh century, a time when the Anglo-Saxons were either newly arrived or were still in close contact with their Germanic kinsmen in Northern Germany and southern Scandinavia. The stories in the poem may have been brought to England by people of Geatish origins. Some suggest that Beowulf was first composed in the 7th century at Rendlesham in East Anglia, as the Sutton Hoo ship-burial shows close connections with Scandinavia, and the East Anglian royal dynasty, the Wuffingas, may have been descendants of the Geatish Wulfings. Others have associated this poem with the court of King Alfred the Great or with the court of King Cnut the Great.

The poem blends fictional, legendary and historic elements. Although Beowulf himself is not mentioned in any other Anglo-Saxon manuscript, scholars generally agree that many of the other figures referred to in Beowulf also appear in Scandinavian sources. (Specific works are designated in the following section). This concerns not only individuals (e.g., Healfdene, Hro gar, Halga, Hro ulf, Eadgils and Ohthere), but also clans (e.g., Scyldings, Scylfings and Wulfings) and certain events (e.g., the battle between Eadgils and Onela). The raid by King Hygelac into Frisia is mentioned by Gregory of Tours in his History of the Franks and can be dated to around 521.