The Rise and Fall of the Ottoman Empire: The History of the Turkish Empire's Creation and Its Destruction Over 600 Years Later (Paperback) 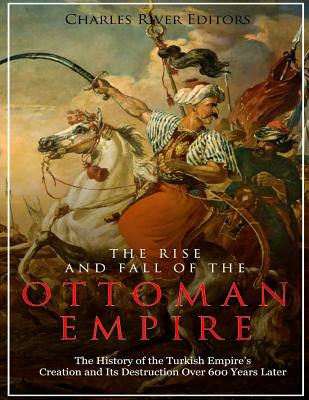 *Includes pictures
*Includes online resources and a bibliography for further reading
In terms of geopolitics, perhaps the most seminal event of the Middle Ages was the successful Ottoman siege of Constantinople in 1453. The city had been an imperial capital as far back as the 4th century, when Constantine the Great shifted the power center of the Roman Empire there, effectively establishing two almost equally powerful halves of antiquity's greatest empire. Constantinople would continue to serve as the capital of the Byzantine Empire even after the Western half of the Roman Empire collapsed in the late 5th century. Naturally, the Ottoman Empire would also use Constantinople as the capital of its empire after their conquest effectively ended the Byzantine Empire, and thanks to its strategic location, it has been a trading center for years and remains one today under the Turkish name of Istanbul.
The end of the Byzantine Empire had a profound effect not only on the Middle East but Europe as well. Constantinople had played a crucial part in the Crusades, and the fall of the Byzantines meant that the Ottomans now shared a border with Europe. The Islamic empire was viewed as a threat by the predominantly Christian continent to their west, and it took little time for different European nations to start clashing with the powerful Turks. In fact, the Ottomans would clash with Russians, Austrians, Venetians, Polish, and more before collapsing as a result of World War I, when they were part of the Central powers.
The Ottoman conquest of Constantinople also played a decisive role in fostering the Renaissance in Western Europe. The Byzantine Empire's influence had helped ensure that it was the custodian of various ancient texts, most notably from the ancient Greeks, and when Constantinople fell, Byzantine refugees flocked west to seek refuge in Europe. Those refugees brought books that helped spark an interest in antiquity that fueled the Italian Renaissance and essentially put an end to the Middle Ages altogether.
The long agony of the "sick man of Europe," an expression used by the Tsar of Russia to depict the falling Ottomans, could almost blind people to its incredible power and history. Preserving its mixed heritage, coming from both its geographic position rising above the ashes of the Byzantine Empire and the tradition inherited from the Muslim Conquests, the Ottoman Empire lasted more than six centuries. Its soldiers fought, died, and conquered lands on three different continents, making it one of the few stable multi-ethnic empires in history - and likely one of the last. Thus, it's somewhat inevitable that the history of its dissolution is at the heart of complex geopolitical disputes, as well as sectarian tensions that are still key to understanding the Middle East, North Africa and the Balkans.
When studying the fall of the Ottoman Empire, historians have argued over the breaking point that saw a leading global power slowly become a decadent empire. The failed Battle of Vienna in 1683 is certainly an important turning point for the expanding empire; the defeat of Grand Vizier Kara Mustafa Pasha at the hands of a coalition led by the Austrian Habsburg dynasty, Holy Roman Empire and Polish-Lithuanian commonwealth marked the end of Ottoman expansionism. It was also the beginning of a slow decline during which the Ottoman Empire suffered multiple military defeats, found itself mired by corruption, and had to deal with the increasingly mutinous Janissaries (the Empire's initial foot soldiers).
Despite it all, the Ottoman Empire would survive for over 200 more years, and in the last century of its life it strove to reform its military, administration and economy until it was finally dissolved.