Enemy at the Gates (A Mitch Rapp Novel #20) (Mass Market) 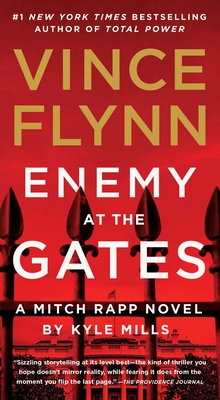 Enemy at the Gates (A Mitch Rapp Novel #20) (Mass Market)

This is book number 20 in the A Mitch Rapp Novel series.

Mitch Rapp, the CIA’s top operative, searches for a high-level mole with the power to rewrite the world order in this riveting thriller from #1 New York Times bestselling author Vince Flynn, written by Kyle Mills.

Mitch Rapp has worked for a number of presidents over his career, but Anthony Cook is unlike any he’s encountered before. Cunning and autocratic, he feels no loyalty to America’s institutions and is distrustful of the influence Rapp and CIA director Irene Kennedy have in Washington.

When Kennedy discovers evidence of a mole scouring the Agency’s database for sensitive information on Nicholas Ward, the world’s first trillionaire, she assigns Rapp the task of protecting him. In doing so, he finds himself walking an impossible tightrope: Keep the man alive, but also use him as bait to uncover a traitor who has seemingly unlimited access to government secrets.

As the attacks on Ward become increasingly dire, Rapp and Kennedy are dragged into a world where the lines between governments, multinational corporations, and the hyper-wealthy fade. An environment in which liberty, nationality, and loyalty are meaningless. Only the pursuit of power remains.

As “one of the best thriller writers on the planet” (The Real Book Spy), Kyle Mills has created another suspenseful read that not only echoes the America of today, but also offers a glimpse into its possible future.
#1 New York Times bestselling author Vince Flynn (1966–2013) created one of contemporary fiction’s most popular heroes: CIA counterterrorist agent Mitch Rapp, featured in thirteen of Flynn’s acclaimed political thrillers. All of his novels are New York Times bestsellers, including his stand-alone debut novel, Term Limits.

Kyle Mills is the #1 New York Times bestselling author of twenty-three political thrillers, including Total Power, Lethal Agent, and Red War for Vince Flynn and The Patriot Attack for Robert Ludlum. He initially found inspiration from his father, the former director of Interpol, and still draws on his contacts in the intelligence community to give his books such realism. Avid outdoor athletes, he and his wife split their time between Jackson Hole, Wyoming, and Granada, Spain. Visit his website at KyleMills.com or connect with him on Twitter, Facebook, and Instagram @KyleMillsAuthor.