The Poetics of Natural History (Hardcover) 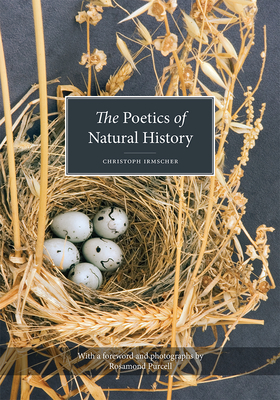 Winner of the 2000 American Studies Network Prize and the Literature and Language Award from the Association of American Publishers, Inc.

Early American naturalists assembled dazzling collections of native flora and fauna, from John Bartram’s botanical garden in Philadelphia and the artful display of animals in Charles Willson Peale’s museum to P. T. Barnum’s American Museum, infamously characterized by Henry James as “halls of humbug.” Yet physical collections were only one of the myriad ways that these naturalists captured, catalogued, and commemorated America’s rich biodiversity. They also turned to writing and art, from John Edward Holbrook’s forays into the fascinating world of herpetology to John James Audubon’s masterful portraits of American birds.

In this groundbreaking, now classic book, Christoph Irmscher argues that early American natural historians developed a distinctly poetic sensibility that allowed them to imagine themselves as part of, and not apart from, their environment. He also demonstrates what happens to such inclusiveness in the hands of Harvard scientist-turned Amazonian explorer Louis Agassiz, whose racist pseudoscience appalled his student William James.

This expanded, full-color edition of The Poetics of Natural History features a preface and art from award-winning artist Rosamond Purcell and invites the reader to be fully immersed in an era when the boundaries between literature, art, and science became fluid.

CHRISTOPH IRMSCHER is the George F. Getz Jr. Professor and the Class of 1942 Professor in the Wells Scholars Program at Indiana University, which he also directs. The author of many books, including Louis Agassiz: Creator of American Science, he regularly writes for national publications, including The Wall Street Journal.

ROSAMOND WOLFF PURCELL is a leading American photographer who has earned international acclaim.  Her work has appeared in numerous collections, including Finders, Keepers (her collaboration with Stephen Jay Gould) and Bookworm. She is the subject of the documentary An Art that Nature Makes.

"American natural history owes much to gifted amateurs who, in the late 18th and early 19th centuries, traveled widely, collected willy-nilly, and then, back at home, devoted years to sorting through their collections and cataloging their contents--an enterprise that introduced scientific rigor into what had been a kind of hobby. So writes literary scholar Christoph Irmscher, who, in exploring the aesthetic aspects of American natural history, considers the careers of several early naturalists, including Charles Willson Peale, John Bartram, John James Audubon, Louis Agassiz, and, in an unlikely turn, the showman P.T. Barnum, who turned a penchant for collecting oddments of nature into an itinerant freak show. All of these, Irmscher writes, delighted in 'transforming relatively random assemblages of natural collectibles into works of art,' works that would in many instances form the foundations for what are today important collections. Among the many pleasant surprises in Irmscher's narrative is an account of an 1865 trip organized by Agassiz to the Amazon River. One of the participants was the young William James, who would later become a famed psychologist and who wrote admiringly of Agassiz's relentless energy in pursuit of scientific specimens while admitting, 'If there is anything I hate it is collecting.' Irmscher's elegant book will be of interest to historians of 19th-century science, and to general readers with a fondness for the work of the brilliant, often eccentric, amateurs of the past."
— Gregory McNamee

" Arguably a classic in its field, this new edition of The Poetics of Natural History is unreservedly recommended as a core addition to community, college, and university library collections and supplemental studies lists."
— Midwest Book Review

"Herpetologists and other naturalists interested in the history of their subject will want this book for the wealth of information it contains on perspectives of collecting and natural history in pre-Darwinian America...The book presents a most interesting history and literary analysis."
— Bibliotheca Herpetologica

"This new edition of Irmscher’s classic text is an excellent example of the value of attention to small details, as well as the tapestry into which they are woven. The combination of stage-setting and specific detail gives an incredible sense of the richness of the world Irmscher presents."
— H-Net