The Opposite of Chance (Paperback) 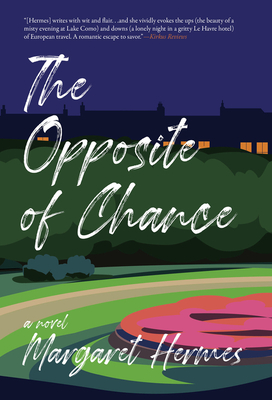 At 32, Betsy is sheltered. Sheltered by a close-knit family, Catholic schools, college in her hometown, and a marriage at 20. It takes the discovery of her husband’s serial philandering to open her eyes and push her out of the nest. It’s the summer of 1981, Betsy grabs a backpack and a few good books and puts distance—geographically and emotionally—between herself and the life she knew in the American Midwest. She begins to make her own decisions: about cities, hotels, and dinner entrées. At airports, on trains, and in pensiones, Betsy takes her first steps into independence as she negotiates the brief, but intense relationships travelers have. Armed with a book of travelers’ phrases and a Swiss Army Knife, she brushes up against possibilities for connection, almost entering the life stories of the strangers she chances upon and whose paths we follow in alternating chapters. We become acquainted with a devout Muslim on a pilgrimage, a French financier raised on a rabbit farm, a lawyer on a solo honeymoon, a Pakistani gambler, a beguiling American threesome en route to Venice, an Italian hotel owner on Lake Como, and a passionate Irish protestor who literally carries her to safety from the streets of Dublin. Finally, back home, Betsy comes to the startling realization that her journey is only just beginning.

Margaret Hermes grew up in Chicago and resides in St. Louis. A collection of her short fiction, Relative Strangers (Carolina Wren/Blair), was chosen by Jill McCorkle as winner of the Bakwin Book Award and given a special second place award in the Balcones Fiction Prize competition. Her novel, The Phoenix Nest, was published in English (Contemporary Books) and German (Wilhelm Goldmann Verlag). She composed the book and lyrics for a stage adaptation of the Oscar Wilde fable The Birthday of the Infanta for Metro Theatre Company. Dozens of her short stories have appeared in journals ranging from Fiction International to River Styx to New Millennium to The Literary Review. When not writing, she concentrates her energies on environmental issues. www.margarethermes.com

Praise for The Opposite of Chance: “[Hermes] writes with wit and flair… and she vividly evokes the ups (the beauty of a misty evening at Lake Como) and downs (a lonely night in a gritty Le Havre hotel) of European travel. A romantic escape to savor.”
— Kirkus Reviews

“When we hearken to the wisdom of our literary ancestors, we get a novel like The Opposite of Chance, and an author like Margaret Hermes, a virtuoso writer navigating the only path that leads to genuine empathy, by embracing multitudes. Bold and brave, Hermes accepts no boundaries on the imagination.”
— Bob Shacohis, National Book Award-winning author of Easy in the Islands and Swimming in the Volcano

“This quick-and-clever Hermes has wings on her prose and a god’s eye view, compassionate and wise, of the human comedy. Her plucky heroine’s European journey is replete with excursions into the lives of her fellow travelers, taking us along on a novelistic grand tour de finesse.”
— Jason Sommer, Whiting Award-winning author of The Laughter of Adam and Eve and The Man Who Sleeps in My Office

“In the artfully picaresque The Opposite of Chance, Margaret Hermes writes, as she always does, with humor and wisdom about women and men and love and sex. And she shines light on those of us who are defined, at least in part, by what we don’t know or understand.”
— Mary Troy, winner of the USA Book Award for Beauties and a Nelson Algren Prize winner

Praise for Margaret Hermes: “Relative Strangers is a stunning collection. Every single story is vivid and memorable, and yet the collective thematic effect is powerful. So many of these characters are strangers within their own families and their own lives people thought to be dead are resurrected and another character s survival is akin to death. It’s all here change, loss, alienation. But so is humor and compassion and a fresh spin on the way people deal with the most vulnerable aspects of life.”
— Jill McCorkle

“Margaret Hermes writes of the sexuality of educated women with a candor and precision unseen since Kate Chopin.”
— Peter Leach, author of Gone By Sundown and Tales of Resistance

“Gives a reader something to enjoy and admire on every page.”
— Jane O. Wayne, Devins Award and the Society of Midland Authors Poetry Award-winning author of The Other Place You Live and Looking Both Ways