The Argument about Things in the 1980s: Goods and Garbage in an Age of Neoliberalism (Paperback) 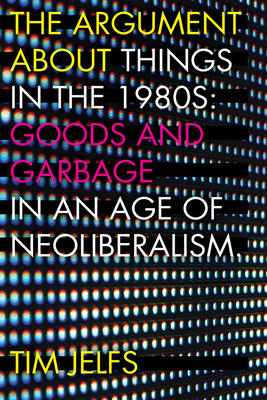 In the late 1970s, a Jeff Koons art exhibit featured mounted vacuum cleaners lit by fluorescent tube lighting and identified by their product names: New Hoover Quik Broom, New Hoover Celebrity IV. Raymond Carver published short stories such as “Are These Actual Miles?” that cataloged the furniture, portable air conditioners, and children’s bicycles in a family home. Some years later the garbage barge Mobro 4000 turned into an international scandal as it spent months at sea, unable to dump its trash as it was refused by port after port.
Tim Jelfs’s The Argument about Things in the 1980s considers all this and more in a broad study of the literature and culture of the “long 1980s.” It contributes to of-the-moment scholarly debate about material culture, high finance, and ecological degradation, shedding new light on the complex relationship between neoliberalism and cultural life.

“This is a superb book—sharply argued, theoretically astute, richly researched, and beautifully written. I think it will make a real contribution to the study of American literature and culture, contemporary fiction, and potentially to emergent fields that are challenging entrenched ways of understanding materiality.  I can easily imagine this book being taught in graduate seminars and think it will gain a readership among students and scholars of US culture.”
—Stephanie Foote, editor of Histories of the Dustheap: Waste, Material Cultures, Social Justice


"Quite brilliantly, and most entertainingly, Tim Jelfs’s new book troubles at and unpicks the ways in which things and an argument about things is conducted across a range of different American fiction written in the 1980s. The book develops a crucially important argument that masterfully demonstrates the importance of the 80s in determining our understandings of contemporary America. It also complicates, significantly and importantly, our appreciation of how neoliberalism inflects older versions of American materialism. Fiction, the book argues, attends to things, everyday objects especially, so as to deliver new ways of reading America and its culture in fascinating aesthetic, political and philosophical ways. As intelligent as it is beautifully written, Jelfs’s book will significantly shape debates about materiality in America."
Nick Selby, Professor of American Literature, Editor of Comparative American Studies, University of East Anglia

"Anyone tired of the usual 'Age of Reagan,' rise-of-the-right narratives that have for too long defined our understanding of the period after the Sixties will be grateful for Tim Jelfs's intervention in The Argument about Things in the 1980s. Jelfs takes up the 'long 1980s' by drawing upon an astonishing range of literature, music, and visual art, and he forces us to consider the period not as defined merely by Reagan and neoliberalism, but by the material things present in American culture at the start of our present neoliberal age. It is an incredibly important distinction, and every page bristles with fresh insight."
Michael Stewart Foley, author of Front Porch Politics: The Forgotten Heyday of American Activism in the 1970s and 1980s