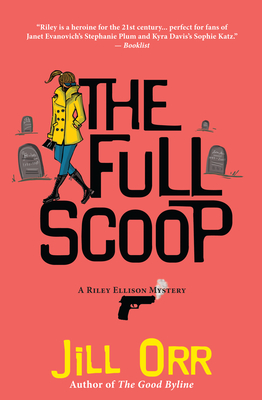 This is book number 4 in the Riley Ellison Mysteries series.

Reeling after tragedy hits close to home, young journalist Riley Ellison becomes obsessed with uncovering the secret that led to her grandfather's murder years before and that just took another life in Tuttle Corner. Her desperate search for answers leads her down a dark path, both personally and professionally, as she struggles with how far she's willing to go to get answers. Just as she finally discovers the truth, she's forced to choose between exacting justice and protecting the people she loves most. With pressure coming in from all sides, Riley has to look deep within to decide if she can let go of the past in order to hold on to the future.
Jill Orr is the author of the Riley Ellison mystery series, which has been called "delightfully comic" and "highly amusing" by Publishers Weekly. Books in the series have garnered praise from industry professionals and readers alike and have earned a Silver Falchion nomination, a starred review and Best Book of the Week from Library Journal, and a Midwest Connections pick.Originally from Chicago, Jill moved to Columbia, Missouri, to attend the University of Missouri, where she received her bachelor's degree in Journalism and her master's degree in Social Work. However, these days the only social work she does is at cocktail parties, and she sometimes wishes her degrees were in What's for Dinner and Decoding the Teenage Eye Roll.Jill lives in Missouri with her husband and two (usually delightful) teenage children. Jill's new illustrated nonfiction humor book, How Not to Be Old (Even if You Are), arrives in November. Learn more at www.jillorrauthor.com.