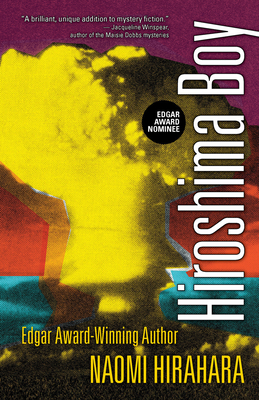 This is book number 7 in the Mas Arai Mystery series.

LA gardener Mas Arai returns to Hiroshima to bring his best friend's ashes to a relative on the tiny offshore island of Ino, only to become embroiled in the mysterious death of a teenage boy who was about the same age Mas was when he survived the atomic bomb in 1945. The boy's death affects the elderly, often-curmudgeonly, always-reluctant sleuth, who cannot return home to Los Angeles until he finds a way to see justice served.

Naomi Hirahara: Naomi Hirahara is the Edgar-winning author of the Mas Arai mystery series, including Gasa Gasa Girl, Summer of the Big Bachi, Snakeskin Shamesin, and Blood Hina. She is also the author of the new series of L.A.-based Ellie Rush mysteries, published by Penguin. Her Mas Arai books have earned such honors as the Chicago Tribune's Ten Best Mysteries and Thrillers and Publishers Weekly Best Book of the Year. The Stanford University alumna was born and raised in Altadena, CA, where her protagonist lives; she now resides in the adjacent town of Pasadena, CA.