My Baby Rhinos: The Story of Kelsey's African Adventure! (Hardcover) 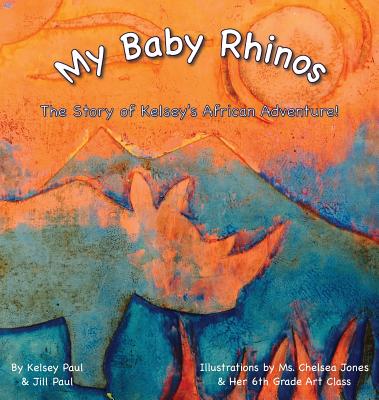 My Baby Rhinos: The Story of Kelsey's African Adventure! (Hardcover)

It all started with a book Kelsey's mom read, The Elephant Whisperer by Lawrence Anthony, which tells the story of his early years establishing the Thula Thula Game Reserve in South Africa and the incredible bond he built with a rogue herd of wild elephants.

Lawrence's conservation efforts soon became focused on the African rhino population that was in danger of extinction because of poaching. Due to local poaching near Thula Thula, more than a few orphaned baby rhinos were brought to Thula Thula, lovingly raised from infancy and then released to the wild.

Two of the orphaned rhinos, Thabo and Ntombi, had been released to the wild but often came back at night to the grounds of the Safari Lodge where they were raised to sleep in the safety of their old home. And that is what Kelsey and her family found their first night at Thula Thula, two young rhinos curled up together asleep under the window of their hut They looked so sweet, it was impossible to think that anyone would want to harm them.

After visiting the Thula Thula Rhino Orphanage, which was nearing completion, Kelsey and her family realized how important it was to help save these babies. The extinction of the rhino population due to poaching was becoming a real possibility.

My Baby Rhinos - The Story of Kelsey's African Adventure tells the story of this amazing experience from Kelsey's perspective. The fundraising she did for the Thula Thula Rhino Orphanage with the support of her family and generous community of Laguna Beach taught her that even a young girl can make a difference.

Kelsey's hope is for her children's story to be translated into languages all over the world to spread awareness and to inspire others to start their own projects to help protect these special creatures for generations to come.