Ben's War with the U. S. Marines (Paperback) 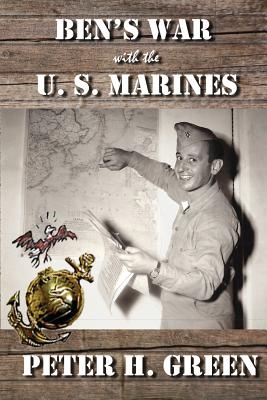 Ben's War with the U. S. Marines is biographical account of the charming and hilarious World War II misadventures of Pfc. Ben Green--a low ranking but quick-witted individualist who battled the system in order to serve his country with honor and to stay alive so he could return home to his family. Facing a draft notice Ben, a resourceful nonconformist and Chicago radio producer with a wife and two small children, enlisted at age 35 with the understanding that he would serve as an officer in Marine Corps intelligence. When he learned too late he was too old for the job he'd been promised, he found himself training in the infantry with angry kids half his age. Back home, his wife Alice struggled with making ends meet, managing the household, and fear of the unthinkable, as she waited in terror for word of Ben's assignment to the next island invasion. His four-year old son, deprived of his doting dad, suffered from the trauma of separation, while his infant daughter didn't know her father from the man on the cover of Time. Like Luther Billis in James Michener's Tales of the South Pacific, however, Ben dealt with both the absurdity and opportunity of military life. He learned how to work the system and talked his way into an assignment where his knowledge of radio could be useful to the war effort. By default he was running the Armed Forces Radio Station on the island of Guam at the nerve center of the war, when his shining moment was heard around the world. This book is richly illustrated with Ben Green's sketches, sent home in his letters to describe his life to his children, and family photographs. The reader will relive the travails of a typical family, separated by circumstance and distance, who, like millions of courageous military families, risked life, property and personal well-being for a greater cause. Ben's story also bears witness to America's Finest Hour, in Winston Churchill's phrase, when Americans from every walk of life pulled together to defeat aggression and tyranny. In speaking for the citizen soldiers and their supporters back home, it illustrates the social history of rationing and wartime austerity, and for the first time ever, records a unique moment in broadcast history, when Ben Green, de facto station manager, and his cohorts at Armed Forces Radio Station WXLI on Guam, scooped the big news a weary world was waiting to hear.