What Is Poetry? (Just Kidding, I Know You Know): Interviews from the Poetry Project Newsletter (1983 - 2009) (Paperback) 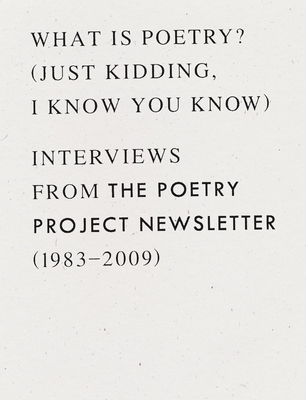 I find it one of the liveliest points of communication in the American poetry world. There is an incredible excitement to come to the church and read one's poems to the many other poets who congregate there, drawn to the church by its own energy and thrust.--Donald Hall

From the introduction, by Anselm Berrigan:

For the poets closely involved with the Poetry Project since, and subsequent to, its inception, the interviews were an opportunity to speak directly to a community one could perceive as known, imaginary, expanding, unwieldy, intermittent, formative, desperately necessary, and sometimes peculiarly unsatisfying all at once. Community being the kind of term that often implies everything and nothing simultaneously, with the bottom falling out of the word depending on who happens to be wielding it. Poets can be particularly adept at using and exposing such terms.

Anselm Berrigan is the author of seven books of poetry: Come In Alone (Wave Books, 2016), Primitive State (Edge, 2015), Notes from Irrelevance (Wave Books, 2011), Free Cell (City Lights Books, 2009), Some Notes on My Programming (Edge, 2006), Zero Star Hotel (Edge, 2002), and Integrity and Dramatic Life (Edge, 1999). He is also co-author of two collaborative books: Loading, with visual artist Jonathan Allen (Brooklyn Arts Press, 2013), and Skasers, with poet John Coletti (Flowers & Cream, 2012). He is the current poetry editor for The Brooklyn Rail, and co-editor with Alice Notley and Edmund Berrigan of The Collected Poems of Ted Berrigan (U. California, 2005) and the Selected Poems of Ted Berrigan (U. California, 2011). From 2003-2007 he was Artistic Director of The Poetry Project at St. Mark's Church, where he also hosted the Wednesday Night Reading Series for four years. He is Co-Chair, Writing at the Milton Avery Graduate School of the Arts interdisciplinary MFA program, and also teaches part-time at Brooklyn College. He was awarded a 2015 Process Space Residency by the Lower Manhattan Cultural Council, and in 2014 he was awarded a Robert Rauschenberg Residency by the Robert Rauschenberg Foundation. He was a New York State Foundation for the Arts fellow in Poetry for 2007, and has received three grants from the Fund for Poetry. He lives in New York City, where he also grew up.