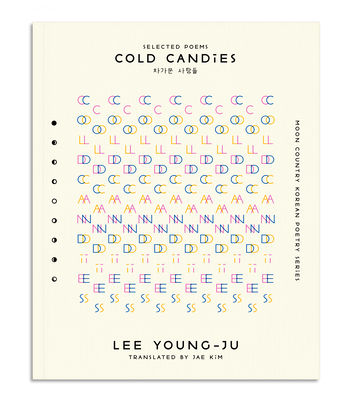 Lee Young-Ju's poems are brief kaleidoscopic scenes. She reminds me of that wonderful drug-addled pharmacist, Georg Trakl. Her poems, like his, map a lustrous dream space where things are bolder, and truer, than the things of this world.

Cold Candies encapsulate the saccharine strangeness of a woman's life. Fragments of narratives about girls, dolls, sisters, mothers, men, lizards, the moon, and pillows are brought together into otherworldly images that are devastating, yet familiar. Lee Young-ju is one of South Korea's most original minds, and this collection, curated and translated by National Endowment of Arts Fellow Jae Kim, features a selection from her extraordinary body of work. These prose poems are often self-portraits, and together, they are as much an account of her life as it is an attempt to understand it. Pulling out threads from her past, she examines its traumas and tragedies and unravels a haunting dreamscape of intimacy and kinship.

Lee Young-ju is the author of four poetry collections. Her work has received support from the Arts Council of Korea and the Seoul Foundation for the Arts and Culture. She is also an essayist and a playwright. She lives in Seoul, South Korea. Jae Kim is a fiction writer and a literary translator. He received his BA from Princeton University and MFA from Washington University in St. Louis, where he's currently pursuing a PhD in comparative literature. A National Endowment for the Arts Fellow, he translates contemporary South Korean poetry by women, alongside early twentieth-century works from Korean and Japanese.