The God That Failed: Liberalism and the Destruction of the West (Hardcover) 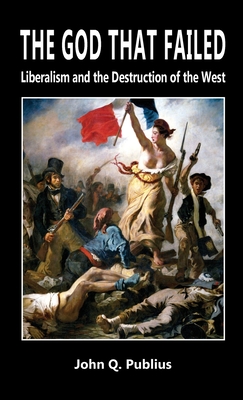 Something's not right. All around us, society seems to be sinking into decay, and we don't recognize, let alone even know, the people living right next door to us. The media sells illusory progress with the latest gadgets and fads, and for all the talk of "social justice," there's scant justice to be had. Alienation, violence, dereliction, and despair fester as the wounds turn septic, and the people are literally sick to death.

The "nameless" system of neo-liberalism is the worst of both worlds: a government willing to "play God", going so far as to generate an entirely new population amenable to their designs - a global population of rootless producers and consumers - and an oligarchic set of international bankers and businessmen who've seen to it that the game is rigged in their favor. This is a system of irreconcilable contradictions, one that peddles "equality" but produces the greatest material disparity. It peddles "liberty" while crushing all dissent. It celebrates "diversity" but is soul-crushingly uniform. Its illusory "progress" looks more like a medieval fiefdom than the always just-out-of-reach utopia the charlatans promise is just around the corner with one more concession, always more until there's nothing left.

'The God That Failed' will drag the hideous "nameless" system into the light and expose its hypocrisy, lies, and destruction.