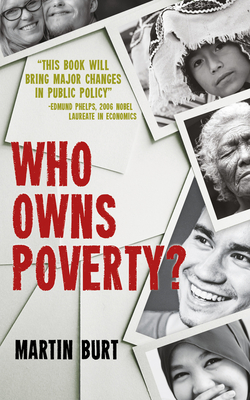 This is the story of the one question about global poverty we never thought to ask: who owns it? It’s a question with an unexpected answer, one that challenges everything that we thought we knew about what poverty is, and what we can do about it. This is a story of a powerful data-driven methodology being used in a dozen countries across 5 continents. It’s a new approach that puts poor families in charge of defining and diagnosing their own unique, multidimensional poverty—who by owning the problem, own the solution. This book is for all the governments, development NGOs, charities, dreamers, thinkers, doers and leaders who are frustrated with limiting their aspirations to reducing poverty, or alleviating its effects—and the lack of progress we face in doing either. This is a book about unleashing trapped energy within poor families to do the unthinkable: eliminate global poverty once and for all.

Dr. Martín Burt is Founder and Chief Executive Officer of Fundación Paraguaya, a non-profit devoted to the promotion of social entrepreneurship and economic self-reliance to eliminate poverty around the world. He is a pioneer in applying new poverty metrics, microfinance, micro-franchise, youth entrepreneurship, financial literacy and financially self-sufficient agricultural technical vocational methodologies. Dr. Burt is currently a board member of the Schwab Foundation for Social Entrepreneurship at the World Economic Forum, the Global Foodbanking Network, and Teach A Man To Fish. He is Co-Founder of the Bertoni Environmental Foundation, Asociación Paraguaya de la Calidad, Paraguay Educa, Club Universitario de Rugby de Asunción, Sistema B Paraguay, and the Mbaracayú Forest Foundation. In public service, he has served as Chief of Staff to the President of Paraguay, was elected Mayor of Asunción, and appointed Vice Minister of Commerce. Dr. Burt has written books on economics, development, municipal government, poetry and education. He has received awards from organizations including Avina Foundation, Skoll Foundation, Schwab Foundation, Synergos, the Eisenhower Fellowship, the Inter-American Development Bank, the World Innovation Summit for Education, and Nestlé. He is a graduate of the University of the Pacific and George Washington University. He holds a PhD from Tulane University, and is a Visiting Professor of Social Entrepreneurship at Worcester Polytechnic Institute, and Distinguished Visiting Professor at University of California, Irvine. Dr. Burt was born in Asunción, Paraguay in 1957 where he resides with his family.

"A meditation on poverty that goes profoundly deeper than anyone else has gone. This book will bring major changes in public policy.” — Edmund Phelps, 2006 Nobel Laureate in Economics; Director, Center on Capitalism and Society, Columbia University

“A new paradigm for effective change. Those entrenched in old funding and program models will find this book irritating. Those whose first commitment is to results rather than legacy models will find it illuminating. Open. Read. And learn from one of the world’s most effective influencers.” — Joseph Grenny, New York Times bestselling co-author, of Influencer and Crucial Conversations

“Burt weaves a compelling case that... long-neglected perspectives from the South are as important as those from the North. This book should be on every development syllabus, and on the nightstand of everyone working to end poverty.” — Richard Matthew, Faculty Director, Blum Center for Poverty Alleviation, University of California Irvine

“Having worked in social development for the past 40 years—I am excited with how Burt defines and simplifies poverty, and places it where it belongs… in the family." — Zanele Mbeki, Social worker and Founder, Women’s Development Banking Trust (South Africa)

“Martín Burt fundamentally reframes the way we think about poverty. A must-read for all people who are fighting for transformational change." — Willy Foote, Founder and CEO, Root Capital (US)

“A wonderful account of his personal journey exploring how to make poverty measurement genuinely ‘owned’ by the poor in ways that expand their agency to potentially transform the nature of their interaction with state and market institutions.” — Michael Walton, Senior Lecturer in Public Policy, Harvard Kennedy School